Slay away as Jason Voorhees in Friday the 13th: Killer Puzzle 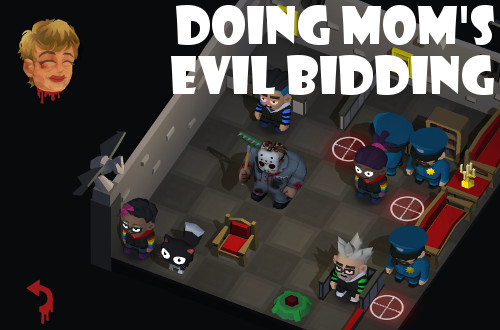 As a young lad, many of the sleepovers with my then best friend resulted in us exploring the nearby woods at night, playing games together on our respective consoles–his a Sega Genesis and mine a SNES–and renting horror films to watch until the sun came up. These ran the gamut from things like Species to Deep Rising, but our favorites, meaning ones we rented multiple times for the local Blockbuster, were the Friday the 13th slasher films. These were, though it is embarrassing to admit to it, our first look at nudity and violence holding hands, a concept that stimulated our teenage brains to their very core, and we’d stay up late after the movie was over, tossing back ideas about what we’d do to take down the legendary Jason Voorhees ourselves, if we ever were unlucky enough to come across him. My plan often involved pushing him off a cliff.

Well, with Friday the 13th: Killer Puzzle, you aren’t trying to beat the man that won’t die; instead, you are him, on a mission to murder every final girl, nerd, officer, punk, etc., one after the other, until nobody’s left to bother you. This isometric top-down puzzler, across a variety of levels, has you sliding Jason across a grid until you literally bump into your victim, instantly murdering them. After taking out all the targets, a final mark will appear, and often reaching them is a puzzle of its own because you can only slide in so many directions. Each level ends with Jason using a stylish finisher move, which would normally be considered grizzly and ultra-violent, but not here, where the game’s cartoonish look keeps everything light and silly. I mean, I don’t know if stabbing a person through the chest with a baseball bat is even possible, but it’s funny to see the hockey masked man do it. Afterwards, your bloodlust gauge fills up, and once it is full, generally with a little help from Jason’s mom’s severed head–don’t ask–you can unlock a new weapon to equip.

Here’s the thing I didn’t expect to experience in Friday the 13th: Killer Puzzle–it’s addictive. The levels are short and satisfying. You can take stock of the layout at your leisure, even switching the camera to an optional top-down view, before making your first murderthon move. Each themed level introduces something new, such as animals you don’t want to harm, people running away from Jason right to an exit, obstacles keeping you from your victims, guards with gnus, and dealing with traps like holes, bodies of water, and electrified fences. Thankfully, it never becomes too much. At first, you can kind of fudge your way to victory, but as the level fills up with all these various elements, you have to slow down and, similar to chess, begin to think several moves ahead. It’s ultra satisfying to see your plan come together, and then you fall into the hole of wanting to at least see how the next level starts, ultimately losing a half hour before you even know it.

Friday the 13th: Killer Puzzle isn’t a difficult game. Levels rarely take longer than a few minutes. What I find ultra appreciative is that the game comes with hints and walkthroughs in it, which means I don’t need to Google anything on my phone when I get stuck or exit out and come back later, losing momentum. At any point, you can click on Jason’s mother’s severed head–still don’t ask–and she’ll either give you a single hint of what to do next or walk you through every single step in fast-forward. You can also undo any more, even ones that kill Jason, or simply restart the level if you feel like you’ve borked it bad enough. I have resorted to using the in-game walkthrough a few times, but only after giving the level a good shake, and I love that it is included, and the language around it is super friendly and not condescending.

Friday the 13th: Killer Puzzle was released, for free, a few weeks back on…yup, you guessed it–Friday, April 13. I believe it is available on phones, but I’ve been playing it in bursts on Steam, and I’m probably halfway through all the levels it came with, currently sliding around Jason from Jason X, not my favorite entry in the series. Anyways, this cute freebie comes from Blue Wizard, the developer behind Slayaway Camp, which shares similar gameplay, but more voxel-based graphics. If I ever see the end of Friday the 13th: Killer Puzzle and really want more puzzle-driven mayhem, I’ll know where to turn to next. Even if it doesn’t have a dedicated button in the pause menu to making the chi chi chi ha ha ha sound effect.

One response to “Slay away as Jason Voorhees in Friday the 13th: Killer Puzzle”