Dice manipulation is the key to One Deck Dungeon’s door 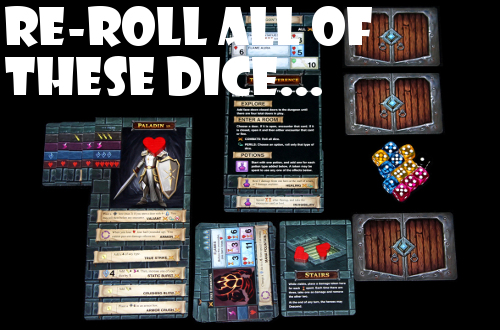 After a handful of attempts, I’ve still not beaten any final boss in One Deck Dungeon, though I got somewhat close against the dragon, better than my time with the yeti, and I’m perfectly okay with that. Each run is completely different and randomized, and luck definitely plays a major factor into how things go, especially when you consider this is a game of mostly dice rolls, and I’m sure I’ll see a flawless run eventually. Until then, I’ll keep kicking open doors, dodging traps and slaying monsters with as much skill as my character sheet allows, trying hard to save all my health potion cubes for the final encounter.

As you’ll recall from my last board game-related post on Friday, I’m getting into solo tabletop gaming. Eventually, I’ll have a post about Fallout: The Board Game, but this is not that post. This one is about One Deck Dungeon, an aptly named roguelike card game, wherein you dive deep into a dungeon for treasures and special skills and build your character up along the way. It’s at times similar to Dungeon Roll and far from it, offering a lot more adventure-affecting decisions each turn. The deck consists of your standard D&D-esque enemies to fight, such as a glooping ooze and a skeleton knight, as well as perils like a spiked pit and boulders, and the character classes don’t stray too far from the traditional, featuring warriors, clerics, and rogues.

Each door card, when flipped over, represents an obstacle to overcome, as well as the potential rewards for doing so. Each turn, after burning a few cards from the dungeon deck to the discard pile, which represents “time” spent, you can reveal what’s behind a locked door and take it on if your heart desires. If you defeat the card, meaning you are still alive and in one piece after all the effects are suffered, you can claim it as one of several things: experience points, an item, a skill, or a new potion type. Each of these affects your character in a specific way, and your current level card determines how many of each you can use at once. For instance, when playing solo and at level 1, you can have one item and two skills. You then tuck the card under the appropriate side of your character card to show off its benefits, such as an extra die to roll or new skill to use in battle. Identifying a new potion not only nets you more options, but also a free potion cube to boot.

Things I’m really liking a whole bunch about One Deck Dungeon are as follows. For one, all the character portraits are women and not sexualized, which is really nice to see in this field where bikini chainmail and mega-muscular dudes run rampant. Layering cards beneath the character sheet and watching the stats and abilities list grow is surprisingly effective and pleasing, reminding me a bit of how Gloom cards went on top of each other, as well as Munchkin weapons and armor sets. Lastly, the manipulation of dice–while at times it can feel somewhat like cheating–is where the most fun shows up, especially as you get more options for re-rolling numbers or exchanging them for other colored dice. Starting off an encounter with a terrible roll and a bunch of ones and walking away from it untouched after covering up every square is an extremely good feeling.

Sometimes there can be a lot of elements to be aware of, and the fights can become overwhelming. For instance, you have to remember that spots on encounter cards with a green shield must be covered first before any others, and the dungeon card has its own spots and effects to be aware of, like discarding all ones rolled each fight or spending extra time to use skills. You must also keep track of the enemy or encounter’s special text, as well as your own skills, and I started using extra white potion cubes as markers for when I used a skill so I wouldn’t accidentally use it twice and therefore cheat my way to victory. Occasionally, I’d goof hard and really want to walk back my actions, but it was almost impossible to remember what dice got traded in and what was originally rolled. Also, as mentioned at the top, the boss fights are pretty tough, and I don’t yet know if I’m the problem–remember, I still haven’t gotten past the pirates in Friday–or if they have been designed to be ultra punishing.

There’s a standalone expansion to One Deck Dungeon out already called Forest of Shadows that adds poison and dice exiling, but I think I’m good with my handful of scenarios and classes for a bit, unless I suddenly become a dice-rolling god, smiting foes and perils with little effort. I’ve also downloaded some extra content from the developer’s website, printing out the Phoenix’s Den and Caliana class cards myself. Evidently, there’s also a Steam version in the works, if that’s your thing; my experience with board games turned into videogames is somewhat limited, having played only a few matches of things like Smash Up, Catan, and Monopoly Plus, though one day I’d really like to check out the digital entertainment version of Lords of Waterdeep. We’ll see. For now, I’ll keep trying to roll six after six after six.