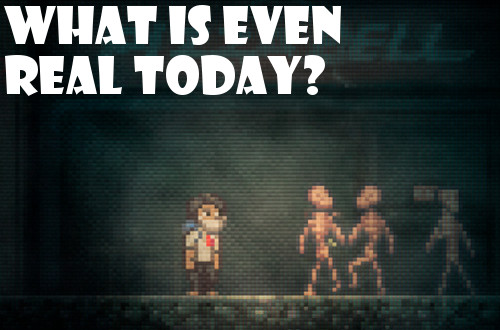 I’d never survive in an actual post-apocalyptic universe. That’s just the harsh truth, one that I’ve come to terms with long ago. There’d be mutated monsters stalking the streets, high levels of radiation eating away at our health, and my bone-dry skeleton curled up inside a bathtub because I couldn’t even bother to try to scavenge for food and water and decided that lying down and closing my eyes for forever was the easier path. Also, if the monsters are even the teeniest bit speedy, I’ll never make it due to…well, cardio.

And that brings us to the ever-so-cheery and delightful Lone Survivor from Jasper Byrne, which is a post-apocalyptic survival horror game with retro-styled 2D graphics and a somber-yet-sick-as-all-gets soundtrack. Please note that Jasper Byrne also contributed to Hotline Miami‘s soundtrack. Well, in this disease-ridden world, the player controls a nameless man-boy, who wears a medical mask, and…well, I don’t honestly know what this person’s true journey is, his desires. He may very well only be following directions provided to him via apparent hallucinations, telling him to go check out this room or that room or use violence to take out the monsters. For me, the clear and only goal was to survive, and exploring the spooky, grimy apartment building you are currently stuck in will reveal a staggering amount of special items, weapons, door keys, pills, notes, and a bunch of different types of food to help in this endeavor.

Lone Survivor is kind of like a point-and-click adventure game, but you also have a pistol and can blast monsters with bullets until they stop moving while trying to keep your hunger, thirst, and sanity meters in check, sleeping now and then too. Still, many of the items you find can be used on other items to solve a specific logic-based puzzle; for instance, early on, you find a pair of scissors and, later, when your passage is blocked by a bulging mass of flesh, you know exactly how to use them. You can also combine items together and even cook food for better results. Otherwise, you’re exploring the nearby hallways and rooms, hiding from or killing monsters, while trying to piece together what is happening and maybe looking for a way out. Your apartment, which has a bed, radio, and stove, acts as a mini-hub, which you can return to using magical mirrors and save your progress.

Silent Hill 2‘s influence here is clear. For one, there’s a man you meet in your dreams with a cardboard box on his head that will probably get you thinking about other men with oddly-shaped heads. Similar to James Sunderland’s quest to find his wife, you are running around a spooky apartment building brimming with locked doors, where things aren’t always what they seem to be. Also, there’s a terrible map system here, just like in Silent Hill 2, and I found myself getting lost constantly, unsure of where to actually go for main and side quest purposes. I’d rather have a blank map that allowed me to annotate it myself than try to parse someone else’s notes on it. Lastly, the shooting is almost purposefully clunky, which means you have to decide early on if you want to waste ammo or use chunks of rotting meat to distract monsters.

Evidently, your interactions with the game’s world and inhabitants result in different endings upon completion of Lone Survivor. Immediately, this stressed me out. I mean, it’s not like this is competing with Chrono Trigger or NieR: Automata in terms of number of endings, but still, now I’m over-thinking every choice I make, like whether or not I should take the green pill before bed because I desperately need batteries to proceed but this might affect the ending I get. Gaah. Given that a single playthrough takes around four to six hours to see credits roll, I most likely will only ever see one ending for this game, and it won’t be any time soon as I’ve already uninstalled it from my PlayStation 3, giving up after an hour or two of meandering back and forth, growing hungrier and more insane by the minute, not sure of why I have these items in my inventory or their ultimate purpose or how to even cook food.

Thankfully, if I ever do want to give Lone Survivor another mighty swing of the horror stick, I have a second copy on Steam, ready to go. Or I could return to Soul Brother, one of Byrne’s earlier projects, and a lighter one at that, if my goal is to feel enlightened instead of devoured.