You gotta swim to survive in Subnautica 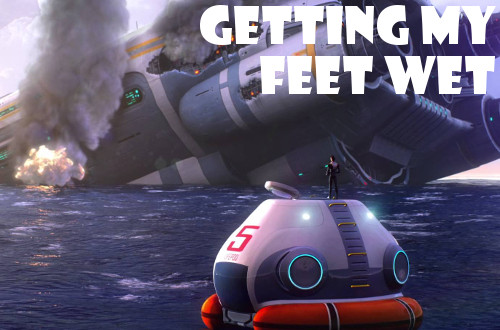 I was lucky enough to get a copy of Subnautica from the Humble Freedom Bundle back in February of last year before they ran out of keys for it. However, I didn’t even install it until two weekends ago, kind of waiting for it to finish up treading water in Early Access and release as a full-as-full-gets-these-days game to play. This way I don’t know what has improved or changed or stayed the same, and all I see is a crashed spaceship and an endless amount of ocean to explore, same as you or your brother or your brother’s mother, most likely your mother too. Right…I’m ready to dive in, even if my lungs are not.

Subnautica begins with a bang. Well, more accurately–a crash. You have smash-landed on alien ocean world, and the only place to explore is down beneath the waves. In the distance is your spaceship, on fire and full of radiation, and though the game never explicitly says you should go back there, one feels the need to get inside it and see if there is anything salvageable, figure out where things went wrong. But first, you’ll need stuff, like food and water and gear, if you are to survive Subnautica‘s shallow coral reefs, treacherous deep-sea trenches, lava fields, and bio-luminescent underwater rivers. You’ll also need to manage your oxygen supply as you explore kelp forests, plateaus, reefs, and winding cave systems, and the water is teeming with life, both helpful and harmful. No one ever said swimming was easy.

So far, I’ve put about two hours and change into Subnautica and don’t have a whole lot to show for it. That’s okay. I’m in no rush, so long as I can continue to catch plenty of bladderfish and peeper to sustain myself and various meters. Actually, I have made some better oxygen tanks, fins to swim faster, a repair tool, and a radiation suit, but there’s plenty more to craft via the fabrication panel inside your still-floating escape pod and I haven’t really left the safety of the initial area.

Here’s the problem I am dealing with: I’m not certain exactly what I should be going after and why. I mean, like Minecraft, which is perhaps the only other “survive” style game I have an association with, the goals are sometimes up to you. Clearly, you want to survive as a general rule of thumb and keep your health, food, and thirst meters healthy and high, but after that…you decide. Maybe you also want to construct a better submersible craft to explore the ocean depths or are interested in cataloguing the various fish and underwater life you come across using your scanner to learn more. Ultimately, I do wish the breadcrumb trail was clearer as even a quest log of sorts would help; right now I feel like I’m stumbling my way to progress, and even that is coming about through mere happenstance and not any specific action I took. For instance, I knew that creating a repair tool was important because there were two things inside my escape pod that couldn’t be fixed without it, but then I struggled to find cave sulfur and had to look up a guide outside the game for it, which was frustrating.

Visually, Subnautica is delightful and terrifying. Granted, again, I’m still only in the starting area and suspect there is much more to come, but the variety of underwater alien life balances itself well between recognizable sea creatures and straight-up weirdness. Every new fish or piece of coral is a fun surprise, and you can generally tell whether something will bite you in the face or not. Exploring at night is extremely unnerving because, not surprisingly, it gets dark, and you only have a flashlight and flares early on. The game runs well enough on my laptop, with just a little pop-in here and there, and I’m thankful that you can play it with a controller too.

I recently tried to get ABZÛ running too on this new laptop of mine, but it seems like that one is real heavy on resources, even on the lowest settings I could find, and so I’ll just have to wait until I magically get a copy on Xbox One or something. Surprisingly, when you search the keyword “underwater” on Steam, you only get a handful of games covering this topic, and most of them are horror titles or VR experiences, which, look, I get. I’ve seen enough of Sir David Attenborough’s The Blue Planet to kind of know what lurks in the dark depths of our planet’s oceans. Still, I like exploring underwater areas in a more leisurely fashion, like with Treasures of the Deep, or the time my sister Bitsy brought home a copy of Endless Ocean: Blue World and played for a bit, and it was so relaxing–not boring–that I dozed off.

So I’m going to stick with Subnautica a bit more because it is definitely my speed, but also in hopes that it really opens itself up more and dangles some carrots before my face to keep me pushing forward for reasons. Besides, I’d really like to see one of those time capsules for myself that are all the topics of discussion these days.