A new time-altering adventure for Marty McFly and Doc Brown 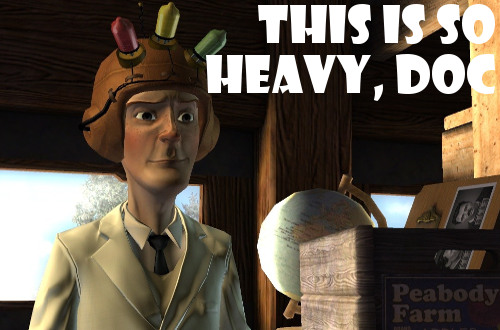 Funny enough, the day after I finished the last episode of Telltale’s Back to the Future: The Game, Back to the Future Part III was on TV. I haven’t seen it or the other parts in several years now, probably not since reading Justin Peterson’s Very Near Mint and realizing there’s a bunch of Easter eggs in there related to Marty McFly’s journey through time. And if I’m cutting to the heart of the matter, the third film in the trilogy is the one that I like the least, with Part I and Part II being my favorites, in that order, because that’s generally how I like my trilogies, including Star Wars and The Lord of the Rings. I figured I’d get that out there in the open at the start of this post because…

Allow me to set up the plot, as best as I can: it’s been about six months since Marty McFly last saw Emmett “Doc” Brown, and the bank has decided to foreclose on Doc’s home. While helping sort through Doc’s possessions, Marty is surprised when the iconic time-traveling DeLorean appears outside of the house. Inside the ride is Einstein, Doc’s dog, as well as a tape recorder with a message from Doc explaining how the time machine would return to this present should Doc ever run into problems. Mm-hhm. Anyways, Einstein helps track down Edna Strickland, the elderly sister of Marty’s school principal and a former reporter for Hill Valley’s paper. At her home, Marty reads through her newspaper collection to discover that Doc had been jailed in 1931 and killed by Irving “Kid” Tannen, Biff Tannen’s father. With that knowledge firmly in hand, Marty and Einstein zip back to 1931 to prevent Doc’s death.

This new time-altering adventure spans five episodes–namely “It’s About Time”, “Get Tannen!”, “Citizen Brown”, “Double Visions”, and “Outatime”–multiple decades, and even copies of characters. Good guys become bad guys, bad guys become good guys, and even Marty ends up a little square (well, in Jennifer’s eyes). Bob Gale, who worked on the films, assisted Telltale Games by writing the game’s story, and it shows, feeling like a natural fit in terms of plot, pacing, humor, direction, and so on. Michael J. Fox and Christopher Lloyd also lend their likenesses, which helps greatly with immersion and feeling like you are really them wandering around Hill Valley, and Lloyd voices Doc. Alas, Fox was unable to voice Marty, but A.J. Locascio does a phenomenal job imitating him and his sarcastic quirks.

Gameplay is pretty straightforward and same-y across all the episodes. You play as Marty and explore a limited number of screens, examining objects, talking to people, and solving somewhat easy, mostly logic-based puzzles to progress the plot forward. Occasionally, there are some things you’ll need to do, such as choose a specific line of dialogue or visit an area first, in order to trigger an event that’s required to complete the puzzle, but it’s not always clear what that action is, which resulted in me brute-forcing my way through sections of the game, trying out everything. There’s an in-game hint system, and the more complex a puzzle, the more hints you can view, but I only used it once or twice by the end, and I never felt like I used my inventory as often as one generally does in an adventure game, with a lot of things just being carried around with no purpose, like that photo of Arther McFly. The whole affair is relatively simple, focusing more on nostalgia than challenge, and for some, that will be a deterrent.

In a critique certainly only related to my experience, I found going back to get some missed Achievements in Back to the Future: The Game extremely frustrating. You often had to replay the bulk of an entire episode for some of them, and you could only skip specific bits of dialogue, but not all, definitely no cutscenes. It also crashed a few times on me for seemingly no reason, and I spotted a few glitches here and there, which is fairly common with these adventure games, where animations are wonky and jittery.

In the end, I enjoyed Back to the Future: The Game, so long as I didn’t think too hard about all its time-twisting, paradox-defying derring-do. The puzzles never got too complex and there was sometimes too much reliance on lengthy cutscenes or conversations, as well as revisiting the same locations with minor changes, but the magic we all felt watching those original films pops up now and then, and that’s more than enough for me to push past some mediocre gameplay and eat up a story full of twists, turns, and treachery. If you are at all a fan of Marty McFly’s time travels, you’ll probably have a good time here, but point-and-click adventure gamers might not find enough challenge to keep their brain occupied. Still, if my calculations are correct, when this baby hits 88 miles per hour… you’re gonna see some serious shit.

This entry was posted in achievements, entertainment, impressions, musings, videogames, xbox one and tagged adventure, Back to the Future, Back to the Future: The Game, DeLorean, dialogue trees, Doc Brown, Emmett Brown, Games with Gold, Marty McFly, point and click, puzzles, Telltale Games. Bookmark the permalink.