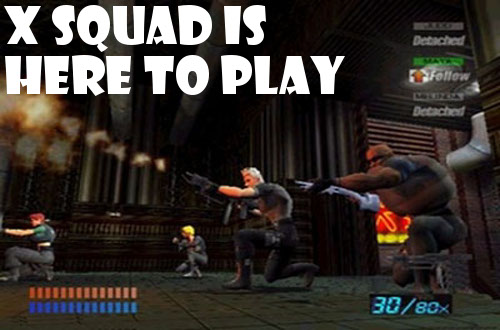 From one X to another, we move from talking about the highs of Mega Man X and how much it brought to the somewhat stale format to diving into X Squad, a PlayStation 2 launch title that, if I’m being honest, wasn’t all that good, but still holds a special space in my heart because it was one of a handful of games I owned after acquiring my hard-earned console. Also, by we I of course mean me, because this is Grinding Down, a singular voice shouting into an echo chamber, praying anyone is out there listening. If you are all ears, please, don’t be afraid to say hello. Tell me your favorite Animal Crossing villager or type of sushi roll. Anything.

Well, in X Squad, you play as John G. Ash, leader of the titular group. It’s the year 2037. Graduating at the top of his class at West Point, he excels in both marksmanship and urban-combat simulation, which is probably what got him the commanding role after forming his personalized team of problem-solvers. Something bad is happening, and the X Squad is called in. I think it has to do with a bio-terrorist organization releasing a devastating plague upon a major metropolitan area, but that’s only known from reading a summary over here. There’s not much story to go on from the get-go, with much of the plot kept secret even as you progress through the early levels. The opening cinematic is extremely vague, immediately starting with Ash talking about investigating “the situation” and ensuring that recon is passed on to the right people, but it doesn’t get any more specific than that, which makes it come across as an empty action hero romp–which is most certainly wants to be.

If I recall correctly, X Squad plays a lot like 989 Studios’ Syphon Filter, minus the cool animation you get when you don’t stop tasering an enemy or Gabe Logan’s hypnotizing swaying hips. You can roll in a bunch of different directions, as well as duck or peek around corners to get the upper hand on unsuspecting enemies. That’s all fine and somewhat standard for this type of run-and-gun action title, but the aspect that ends up making X Squad stand apart from its competitors ultimately detracts from the entire experience, offering next to no value. With only a few simple button presses, Ash can bark orders to his teammates, tasking them with things like scouting out an area to backing you up with gunfire. SOCOM U.S. Navy SEALs this is not. These commands fall under terms like “follow,” “recon,” and “stay.” Your teammates are never really as helpful as they should be, running into rooms of armed men wildly without even bothering to take cover, but thankfully you don’t need to rely on them 100% to make it through a mission with skin still attached to your bones. Still, the point of a squad is to fight as one singular unit, and that’s not the case here. Ash is better on his own, using his teammates more as distractions than anything else.

Also, X Squad is not a looker. I mean, it was a launch title for the PlayStation 2, and it shows. Besides having a bland, flat look to the environments and character models (save for Ash’s spike-tastic hair), glitches are bountiful, with flickering being a common issue. Sound-wise, there’s a lot going on here. The voice acting is stiff and uninspired, and though I like the inclusion of voiced tutorial prompts, it’s not executed well. Still, the door opening sounds are pretty good. The biggest compliment I can give X Squad is that those are some sick and consistent drum beats playing in the opening level (warning: they don’t kick in for at least a minute, but it’s worth the buildup). Also: really great slap bass lines throughout. Honestly, the OST is the reason to play X Squad, but you could also not play it and simply let your ears enjoy everything over on YouTube. Your call, boss.

Still, all that said, and I continue to lack the words to explain this phenomenon, I regret trading in my copy of X Squad. Maybe it has less to do with the game’s quality and more to do with the fact that the PlayStation 2 was the first console I purchased myself as a working lad, busing tables, and so every early game in my collection was special, regardless if it ultimately was special or not. I’m seeing copies on Amazon for around $8.00, and I sadly think that’s too steep of a mountain to climb. I’d love to see this come to the PlayStation Network as a downloadable, but I think the ship for digital PS2 games on that system has sailed, with no map or fuel reserves or even captain, never to be seen again.