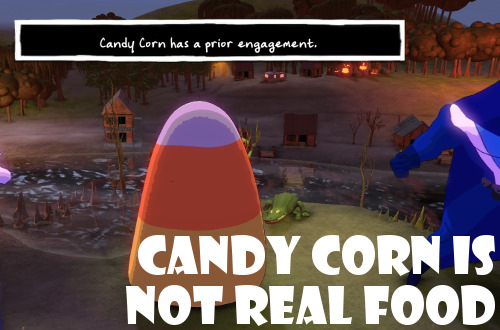 I enjoyed that first Costume Quest game. It was cute, charming, bite-sized, rewarding, and perfect for warping you back to your childhood to remember those consequence-free times of running through your neighborhood, ringing doorbells, and asking strangers for candy. Surprise, surprise, being that the games are nearly identical to each other in terms of mechanics, pacing, and exploration from the eyes of children with larger-than-life imaginations, I also enjoyed Costume Quest 2. Probably more than the first adventure.

Here’s the four-one-one. Costume Quest 2 from Double Fine and Midnight City takes place once again on Halloween night. The fraternal twin siblings Wren and Reynold from the original game are back, as well as a bunch of their friends,  to save All Hallows’ Evening from the evil Dr. Orel White. This ultra-nefarious dentist has teamed up with a powerful time wizard, as one often does, releasing the Grubbins into the human world in hopes of ridding the candy-filled holiday entirely from history. Wren and Reynold’s friends open a mystical time portal from the future to explain that, where they are from, Halloween has been permanently outlawed, with Dr. Orel White ruling the world. Wren and Reynold go back to the future with their friends to stop this disillusioned dental surgeon for good.

If you’ve played the first Costume Quest, you’ll know how this game works because it is nearly identical. You move around an enclosed area full of things to punch for candy and on-screen enemies, like a suburban neighborhood or dental compound, talking to NPCs and solving simple navigation-blocking puzzles. Often, to get where you want to go, you need to use the right costume. For instance, the pterodactyl can use its wings to blow away big piles of leaves or garbage, and the wizard can illuminate dark areas the kids are too scared to explore without a light. There are main quests to follow, as well as small side ones that will earn you extra XP, upgrade your candy bag, and provide rarer Creepy Treat cards.

The main aspect gating progress in Costume Quest 2 is combat. It’s turn-based, focusing heavily on timed button presses, just like Paper Mario: Sticker Star. You select attack and then must time the button press with the indicator on-screen to hit maximum damage. You can also do this for blocking, to take less damage, as well as learning the ability to counter attacks later on. Each of the costumes the kids wear have different basic and special attacks, and I ended up relying on the Superhero, Clown, Wizard, and Jefferson costumes the most. I’ll talk about the Candy Corn costume in just a bit. All of the costumes have different strengths and weaknesses against specific enemy types, but I really never found myself worrying about that. You can run away from any fight, and even if you die, you respawn by the fountain of health to try again. This is not the Dark Souls of lite RPGs.

In fact, the hardest thing about Costume Quest 2 turned out to not even be terribly difficult, just a little more time-consuming. I’m talking about the “Hardcorn” Achievement, which requires you to keep a kid in the Candy Corn costume for the entire game. Basically, the Candy Corn costume does not attack enemies. You can still take less damage to it with a proper button timing when blocking, but otherwise it doesn’t do much other than make silly quips at the start of its turn, which, alas, I can confirm do repeat. Later, when Corvus teaches the kids how to perform counters, Candy Corn can at least occasionally deal some damage back, since everyone like to target it the most. This did make the boss battles go on a little longer than normal, but otherwise, I was able to do it, and I even shared this journey with all of you via Extra Life this past weekend. You can watch the videos on my YouTube channel (not all are up yet). Also, thanks to Microsoft’s latest dashboard update, I can now tell you that, on the Xbox One at least, this is a pretty rare accomplishment. Like 2% rare…

Go me. Anyways, Costume Quest 2 is real cute. Super duper cute. The kind of cute fun that makes you feel safe again in a world that is undoubtedly growing more dangerous every day. For sure, I’ll play Costume Quest 3, if Double Fine decides to make more, but I’d love to see this evolve more mechanically. Granted, I think it was a surprise to everyone that this sequel alone got made. That said, I’m getting a copy of Costume Quest 2 this month on PlayStation 3 from PlayStation Plus and, for once, I will not even bother downloading it. I’ve done everything there is to do in this cartoonish Halloween-land. Until the next thwart on withholding candy from children, I guess.