Soul Brother’s puzzle platforming life is but a brief tenure 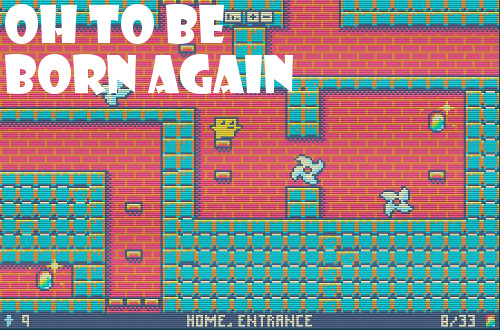 I have two copies of Jasper Byrne’s Lone Survivor in my collection, one on the PC and the other my PlayStation 3, and I’m scared to play either. Y’all should know this by now, but I’m terrible when it comes to horror games or even games with just a slight hint of horror. I don’t like walking around a corner in real life and getting scared when something jumps out at me, and I like it even less in videogames. This is why it took me years to play through Silent Hill 2. Strangely, I’m mostly okay with horror films, as I’m not in control and just along for the ride, though some, such as The Gate or The Blair Witch Project, continue to give me nightmares to this very day. Thankfully, Soul Brother, which is one of Byrne’s earlier works, is a more lighthearted adventure, despite all the forced suicide.

You play as one Mr. Soul, a spirit that can body hop from creature to creature upon death. This spectral form is on a quest for wisdom and understanding, and to find that, it’ll have to navigate a weird, maze-like landscape, using the body and skills of the bodies it inhabits to make progress. Different bodies will help in unique ways, such as the bird Birdie that can hover across long stretches or the cat Nemo who can double jump. Mr. Soul also needs to avoid enemies on screen, floating saw blades, and pits of spikes because this colorful, kaleidoscopic realm is full of danger, while also trying to collect every gem of wisdom along the way. It’s the only way to understand reincarnation, naturally.

Soul Brother is free to play in your browser over at Adult Swim’s gaming site. I’ve enjoyed other titles from there before, such as Insidia and Winnose. Just search Grinding Down if you want to know more. Anyways, this retro platformer is just as good and kooky, with enough challenge to stop you for a bit in several rooms as you noodle out a solution to make it out alive or, in some cases, kill yourself in the most strategic way possible. The arrow keys move your character left and right, and the X button is for jumping, which changes based on the body Mr. Soul is currently occupying.

Alas, I did not collect all the gems of wisdom. There’s 33 in total, and I grabbed about 8 or 9 before moving on to the end. Thankfully, you don’t need to collect all (or any) of the gems to reach a higher plane, but they are there if you’re looking for an extra challenge or goal. Evidently some gems are also tucked away in hidden rooms. At the end, you are rewarded with fruit pick-ups from a multi-limbed green entity based on a number of different attributes, like time completed and how often you had to reincarnate. I suspect getting all the gems would give you something really good here, but that’s just me speculating. I was content with my pixelated pear and orange.

I can’t end this post on Soul Brother without touching on its soundtrack. It’s so full of bounce and pep that it is in complete contradiction with the idea of killing yourself to be reborn in a better body. The soundtrack makes me want to live more in my original body, to get up and move, to nod my head as I wiggle my heads. Truthfully, I’ve been listening to it on full repeat as I wrote this post. There’s a bunch of thick drum and bass, crunchy electronica, wonky synth action, and just enough odd sound effect sampling to keep you on your toes. Warning: these great tunes may get in your way of successful platforming.

Lastly, I don’t believe in reincarnation, but I look at my cats every day and do think they have it pretty good. So, if push comes to shove, I’d like to be reborn as a furry friend for a nice human, where the biggest concern of my day isn’t avoiding swinging saw blades but rather finding the most perfect slant of sunlight and taking a nap in it. Right meow please.