Natural ability and magnetism only get you so far in Teslagrad 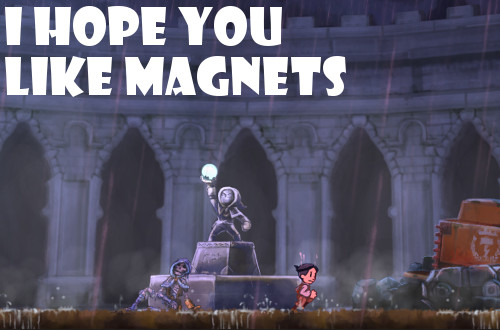 I’m not officially committing to anything here, as committing to tasks in the past has not worked out phenomenally, but 2016 is hopefully going to be the year that I actually make a dent in my PlayStation Plus backlog instead of simply day-dreaming about doing so. That said, my digital collections on the PC and Xbox 360/One also continue to expand daily, proving to be strong competition for my attention. Regardless of that, I’d like to think we’re off to a decent start so far, with Rain and The Unfinished Swan already getting played and put away for good. I suspect I’ll be going after the smaller indie titles first than, say, that copy of Batman: Arkham City that scares me to even start.

Also, looking at that list of names all together really hits home that many of these smaller titles blend together in my brain. I don’t know the difference between Vessel and Closure at this point. So we’re not starting with either of them.

Well, this is probably only amusingly strange to me, but check this out. At the beginning of 2016, as mentioned before, I played a game called Rain, which is about these little children being chased by monsters through some nameless Eastern European town as it rains like crazy. Flash-forward a month or so, and I’m giving Teslagrad a chance, which is a game from the funnily enough named studio Rain Games. It also opens in a similar fashion, with a young boy running from the king’s angry-looking guards in the Kingdom of Elektropia as the weather takes a turn for wetter pastures. Eventually, the boy ends up inside a maze-like tower, where he’ll discover special powers, as well as the rich history behind the kingdom’s many conflicts.

Let’s see. Teslagrad is a colorful, 2D puzzle-platformer. Magnetism and electromagnetic powers are the key to solving many of the game’s puzzles and finding new paths to take through the mystical tower. So far, the game features minimal combat segments, though I did fight a massively mechanical owl with a cage for a body in a boss-like fashion. Instead, it’s mostly about electric-based puzzle sections and precise platforming and teleporting. Yes, teleporting…though you can only dash forward a small distance and not through every substance in front of you. The tower can be explored in a non-linear way  though I wish there was more direction or sign-posting to confirm you are making progress and not simply wandering or revisiting areas in uncertainty.

Here’s what I’m totally into when it comes to Teslagrad. The art style betrays you, because the colorful characters and environments quickly become menacing and frustrating, all without changing their look. Honestly, I went into this game fairly blind and assumed it was an adventure game of sorts, not one that relied heavily on quick reflexes and using your noggin to move platforms to and fro. This is a good thing, as it is fun, once in a while, to be deceived. Solving a tough puzzle is satisfying, but figuring things out occasionally requires simply trial and error tactics. Ultimately, it requires timing and patience. Every now and then you’ll stumble into a cinematic cutscene, which is presented within a mini theater using cute cutouts and minimal animation.

Now for the stuff that is both driving me mad and further away from the game, to the point that I suspect I might walk away from this if things don’t improve in my next session. It’s a little too open, with next to no hints pointing you in the right direction, other than up the tower. The map is mostly useless, represented as simply large colored squares and rectangles that do not tell you much about the space or if there are any collectibles left in there to grab.

I actually think I’m nearing the end of Teslagrad, having just taken down the third boss of five total. Oleg took many, many tries, probably somewhere in the thirties. Alas, there is nothing too puzzle-tricky about the boss fights. There’s a pattern to each that’s easy to see, but it must be carried out hair-width precision three times. The repetition does not result in excitement, but rather frustration, as one tiny mistake will cost you the entire encounter. I don’t plan on getting all the scroll collectibles, despite each one being tied to a Trophy unlock, so perhaps I’ll just grit and bear it and head down as straight a path as possible to the last two bosses. If I’m successful, you’ll know it by the birth of a new haiku.