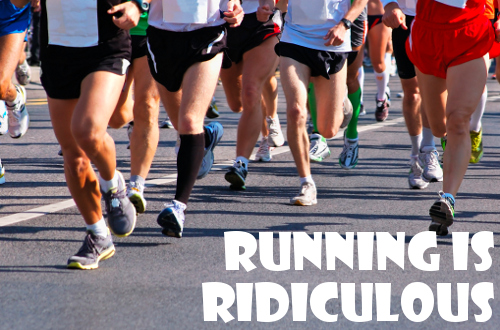 GET READY TO RUN A CRAZY MARATHON FILLED WITH CANDY, TOFFEE, SWEETS AND CONFETTI

Er, yeah. Settle down, copy writer. Also, even after playing Ridiculous Marathon for a bit, I can’t agree that the game is filled with these items. You’ll see a piece of candy every few feet, but only until you complete the Daily Challenge, and then you’ll never see another sliver of candy again until the next day. As for the toffee and sweets–no idea where they are. Confetti appears from time to time as you morph into a powered-up piñata, but this isn’t a game about hitting the crap out of a stuffed container often made of papier-mâché. It’s an endless runner, through and through.

I’ll say with certainty that Ridiculous Marathon is an easier and more forgiving endless runner than Temple Run 2 and Lara Croft: Relic Run–put together. There are fewer turns and obstacles to avoid, with a larger focus on jumping over construction signs and avoiding trucks carrying long wooden logs. Your move set includes jumping, moving left to right, and sliding–that’s kind of it. There’s no turning corners or running along walls to not fall in pits, but you can double tap the screen to turn into an invincible piñata that will, I believe, save you from one crash. I’ve gotten pretty far without much outside help, hitting around 150,000 points in score. With the help of some revive diamonds, I expect to hit 500,000 points rather easily.

Naturally, with this being a free-to-play endless runner, there’s microtransactions available that could help each of your runs be more successful, but only if you plop down some cash. So far, I’ve ignored all of those options and am doing just fine. You can buy single use power-ups with the gold you collect as you move through the Amazon rainforest, as well as upgrade power-ups or purchase costumes for your characters, though those are simply cosmetic in nature. There are ads, but they are easy to dismiss, though I don’t understand why I have to sign in with my Microsoft account every single time I load it up to play; other mobile games don’t ask me to do this.

There are two systems at work to keep one coming back to Ridiculous Marathon, and they are the Daily and Weekly Challenges. The Daily Challenge tasks you with collecting a number of candy as you run, which is easy enough because, just like with all the game’s power-ups, you can spot them from a distance as a beam of light shoots up and out of them. Do this for five days in a row, and you’ll unlock a mystery box, which gave me some free piñata power-ups. The Weekly Challenge wants you to collect golden palm trees, and the one I’m on is for finding 21, of which I’ve gotten nine. They show up a whole lot less, so we’ll see if I get any reward by the end of the countdown, which stands at 34 hours left. Hmm.

In the end, Ridiculous Marathon is fine. It’s not as ridiculous as one might think, nor as tiring as running an actual marathon. Well, I actually can’t speak officially on that last part. Perhaps this is a runner better suited for younger gamers or those just getting into the genre. Anyways, I expect to play it for another week or two until I’ve wrung every ounce of fun from it, and by fun I naturally mean Achievements.