Perishing is progress for Temple of Yog’s tributes 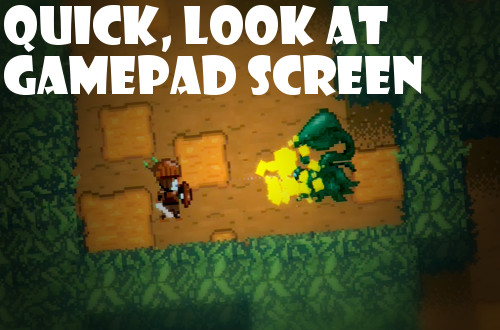 Let’s get the nitty-gritty out of the way: I’m buddies with Lee Bretschneider, the artist from ChudChud Industries and main pixel-morpher on the company’s first release Temple of Yog, which dropped on the Nintendo Wii U’s eShop last week, alongside something called Mimecrass. Real quick aside, spellcheck suggests the following instead of nitty-gritty, which I find amusing–bitty-gritty, nutty-gritty, natty-gritty, titty-gritty, and ditty-gritty. Also, I paid for Temple of Yog with my own hard-earned digital dollars, so don’t go thinking I’m on the take here. The last and only free game I got for review purposes was Monster Tale…a game that had you looking between two screens in the middle of all the action. Hmm, coincidence.

Temple of Yog‘s lore is thick with murky ancient history and told through a somewhat difficult font to read. Here’s what I’ve grokked so far: after Ao the Original, the leader of a small band of villagers, sacrificed himself for the greater good, things have been pretty good for said band of villagers. They found refuge outside a large temple’s base, finding great returns in terms of ripe fruit and fresh fish. The settlement prospered in the Zenith Portal’s protective glow. However, in appreciation for the temple’s generosity, the villagers provide a sacrificial offering via someone‘s life. Depending on how great of a warrior this someone is will affect how the village continues to grow.

Basically: get as far as you can and collect as many Boon points before you die so that you can upgrade your different classes to be stronger, better, more prepared for the next run. Think Rogue Legacy, but without the castle or hereditary traits. Or replace the castle with guilds. It’s a twin-stick shooter, so you move your character with the left stick and fire magic projectiles with the right. Everything you kill and do earns you Boon points, including moving on to the next area, which means players that can’t help but clear out every enemy in both the Light and Shadow realms will benefit the most. Right, there’s two realms, which you can switch between at will: one is on your TV screen, and the other below on the Wii U GamePad. However, you can only linger in the Shadow world for so long until your meter drains.

Before heading through the Zenith Portal to begin racking up Boon points, you’ll have to pick one of four classes: Holy Augur, Cult of the Magi, Livid Blade, or Rogue’s Nest. Each has their own stats and special abilities, and I’ve tried every one now, but found that I’m only interested in the Holy Augur guild. Why? Its special power is healing, a necessity when making headway through a jungle full of dangerous creatures. They also have fantastic reach. I’ve spent a lot of Boon points enhancing this guild the most. As you explore, you can find special items–like boots that make you move faster–as well as crystals that will give you side objectives for a chance to earn extra Boon. I wish there was more of the latter, or that the crystals showed up more frequently, as it gives me something to work towards, other than just eventually buying the farm.

Look, I’m not great at Temple of Yog. This has been my best run yet, getting as far as fighting the first giant wolf (warg?), but Fromage the Beloved hit the ground fast with one bite from its snout. Turns out, you should attack wolves from behind. Since the floors are randomly generated, some areas are tougher than others. I’ve encountered empty Light worlds, a Light world with one static plant monster, and then another filled with six to seven spiders, all bent on spitting in my face. This randomization greatly affects, at least for me, how far I’ll make it in a run. It also helps feed the “one more run” mentality.

Not every element here is a worthy sacrifice. This might be a problem only specific to me, but I had to “pause” the game a few times during runs, either to get a phone call or clean up surprise kitty cat vomit, and my natural inclination is to hit the “+” button. Nope. That doesn’t pause; it automatically sacrifices your character, and yes, I did this a few times before learning from my mistake. Still, when you are in a world where everything wants to murder you, a pause button would be welcome. I’ve also spawned inside a spider or right next to a spider when moving on to a new level, which is not ideal. Lastly, I play with the Wii U GamePad in my lap, which makes looking down at it and away from the TV screen a dangerous and unnerving task. Others might be better at it, but I’m still hesitant to do it often.

So, this first slice of Temple of Yog falls under the label of “The First Epoch,” with three further updates forthcoming next year. Early investors, like me, will get those for free, but others will have to suffer with the game’s base price increasing with each new add-on. Regardless, I’m going to keep playing, because death is progress, even for meager Boon points, and, theoretically, I’ll only get better as the guilds grow stronger and can take on and dish out more damage. Let’s check back later when I can take down a clutter of spiders like a pro.

Also: Temple of Yog‘s soundtrack is killer, probably something like 805,967 in Boon points. Sacrifice gladly accepted.