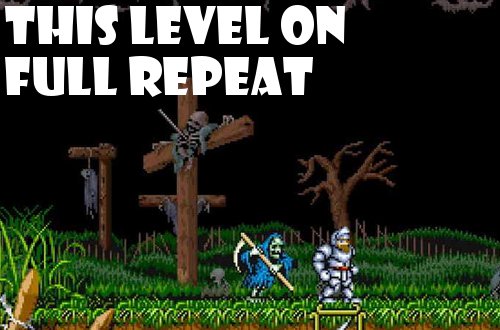 Starting out, I had only a few games for the Super Nintendo, my first home console. Back then, unlike today, games were scarce and limited, gifts given to you by loved ones every X number of months or purchased via the savings you had from doing daily chores over the summer, and so you played what you had, over and over and over, because they were the only digital entertainment you had. Hopefully your friends had different titles to try out. Well, you also played Super Mario World, Super Metroid, and The Legend of Zelda: A Link to the Past over and over again because they were fantastic, constantly surprising and rewarding, beyond fun to this day. More to the topic at hand, I played Super Ghouls ‘N Ghosts over and over again because it was frustratingly difficult.

You control the knight Arthur, who is entrusted to rescue the princess from a bunch of evil demons. Yup, game plots back then were as straightforward as they get, often with men saving a woman in peril, whether that man was a plumber, young boy, or legendary warrior. Anyways, Super Ghouls ‘N Ghosts‘ antagonist is the Emperor Sardius, who has kidnapped the princess in order to obtain the whereabouts of the Goddess’ Bracelet, the only weapon in existence capable of destroying himself. Kind of like a Horcrux, I guess. Hmm. I didn’t know about that last tidbit, but seeing as I never got really far along in this mighty quest, that makes plenty of sense.

For those that know not, Super Ghouls ‘N Ghosts is an action platformer, with a good focus on both action and platforming. Health is represented by Arthur’s suit of armor, which can be upgraded a bunch of times. Whenever an enemy deals damage, the armor lessons, falls apart, all the way down to having our heroic hero running around and tossing lances in only his boxer shorts. It’s humorless, but works really well to visually show how much more damage you can take before buying the farm. Oh, and Arthur can double jump, which was not as common as you think back then. Other than that, it’s all about moving and reaching the end, killing every demon or demon-created enemy in your way.

The big thing I remember about Super Ghouls ‘N Ghosts is that, just like in DuckTales, treasure chests are hidden and can only be accessed by moving through certain specific areas of the screen, causing them to appear. Thankfully, since I sucked at saving the princess, I got pretty good at knowing where many of the hidden areas were in the first few levels.

Years later, after piling this game up with a bunch of others and trading it in for some credit towards a PlayStation, I snagged a copy of Maximo: Ghosts to Glory for the PlayStation 2. It is based on the same universe and features original character designs by Japanese illustrator Susumu Matsushita. Despite having an albeit punishing save system, the game is still as grueling to get through, but I’m once again halfway decent at the opening few levels, as I just keep replaying them from time to time.

Evidently, to get the true ending and ruin the rest of Emperor Sardius’ days, one must complete Super Ghouls ‘N Ghosts twice. In a row. I’m sure it’s been done. I’m sure all I have to do is type some words into the YouTube search box and I’ll see what I want to see. That said, I prefer living in ignorance, remaining a child in his bedroom, twisting the SNES controller in my sweaty palms, screaming at the TV, “This game is impossible!” before popping back over to causing chaos in Sim City. I know it’s not, but Arthur’s journey is not a walk through the park. It’s a walk through a skeleton-laden park that hates you. Now double that feat and keep your clothes on the entire time. No thanks.

Sure, I like playing that opening level a whole bunch, but maybe, in the end, this is actually one game I don’t regret trading in.