A day in The Stanley Parable’s life is hilariously sad 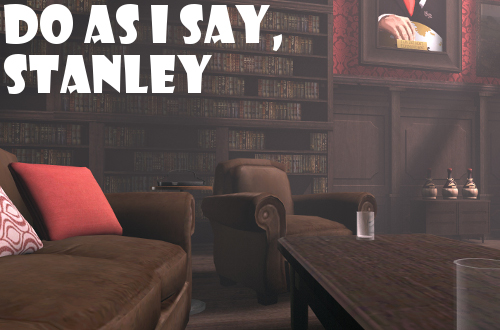 My first run through The Stanley Parable–er, more like slow walk–was pretty straightforward. I simply listened to the narrator’s instructions and followed them exactly, never questioning a single demand. I was a good, obedient lab rat, and for that, I received an ending that rewarded my mind-controlled actions with a glimpse at freedom, of blue sky, billowing trees, and a cool breeze. Sure, there were puzzles still left unanswered, like where had all of Stanley’s coworkers disappeared to, but I liked it nonetheless and immediately dived back in to see what I could do differently; maybe inaction was the key.

The Stanley Parable tells the story of, well, Stanley — an everyman office drone whose mundane existence is interrupted one day when he discovers that all of his coworkers have mysteriously vanished. As you take control of the protagonist and begin exploring the abandoned office building, a snarky British narrator (voiced by the wonderful Kevan Brighting) explains each of your decisions before you make them. Or talks at length if you simply stand around for too long, admiring a waiting room or well-watered plant. Either way, the narration drives the plot, and it is up to you to decide whether you want to follow along or rebel.

The Stanley Parable plays from the first-person perspective, similar to Gone Home and Dear Esther. The player is able move around and perform interactions with certain elements of the environment, like pressing buttons or opening doors, but has no other controls. You can’t even jump, though I do suggest everyone tries at least once. It’s a game about choice and choices, and you can follow along with the narrator or discover your own path through the game. You might think that something as minor as taking the door on the right instead of the left wouldn’t have a great impact on things, but it does. Everything matters, and, in a sick sense of mind, nothing matters.

Have you ever been in a large office space all by yourself? I have. Let me tell you–the feeling is strange. Walking around, seeing empty desks and lights off in certain areas. Yet you are still there, existing, interacting with the world, and everyone else is gone. While I hated seeing all the spilled coffee at the Picus Communications headquarters in Deus Ex: Human Revolution, I loved walking around looking at everything before baddies showed up. There’s voyeurism, and there’s a general curiosity about examining how other people decorate their home-away-from-home workspace. This is the my favorite part of The Stanley Parable, going through those first few rooms, looking for clues on the cleanest desks ever created.

I discovered a few of the endings myself, but looked up the remainder of the ones I missed. Spoilers: there’s many ways to conclude Stanley’s journey. It’s not that I don’t mind replaying the same short experience again and again, it’s just that I wasn’t sure I was performing the right actions to see a different conclusion. In fact, I ended up stumbling into the “freedom” ending once or twice by getting locked inside Stanley’s boss’ office with no other way out. Either way, they are all neat and amusing, if depressing in tone. The Stanley Parable isn’t a happy game, especially when I look at myself, a cubicle-dwelling working stiff just like Stanley save for the voice in his head, but it is fascinating to see unfold and peek behind the curtains. It starts out perfunctory, it ends in ridicule.