Exploration is the name of The Legend of Legacy’s game 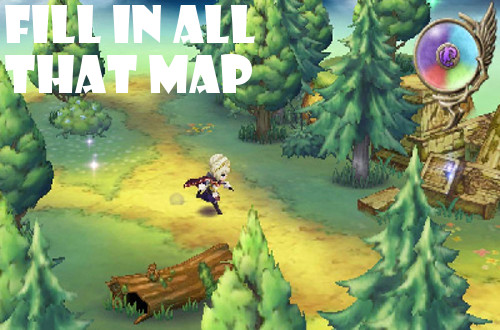 Yesterday, during my lunch break, I did two things: one, I picked up a copy of The Legend of Legacy, which is a new JRPG from Atlus, and two, I put down some cash money on a pre-order of the forthcoming Xbox One bundle for Fallout 4. Now, of those two, one is certainly more exciting than the other, but I’ll talk about my decision to go with an Xbox One as my entryway into the current generation of videogaming at a later date. For now, it’s all about mapping and grinding, sometimes simultaneously.

Some of you might remember a wee unassuming game back on the PlayStation 1 called SaGa Frontier. In fact, I used to own a copy. Anyways, despite not sharing the franchise name or even having a unique, catchy title of its own, The Legend of Legacy is a spiritual successor from Furyu, in conjunction with former staff members for Square Enix and Level-5. Namely illustrator Tomomi Kobayashi and designer Kyoji Koizumi of the SaGa series, Masato Kato, writer of Chrono Trigger and Chrono Cross, Masashi Hamauzu, Final Fantasy XIII‘s composer, as well as ex-Level-5 staffer Masataka Matsuura as its director. Yup, it’s got quite a pedigree of creatives behind the wheel.

I’m going to hit you with a truth bomb right from the start: I don’t know the plot. I might not ever know the plot. It’s seemingly going to be told through poetry and over-dramatic descriptions of things done in the ancient past. At the start of The Legend of Legacy, you get to pick one of seven characters to play as, and I went with the default swordsman Meurs, though there are a bunch of other traditional tropes like the girl with amnesia or the ambitious, smarmy treasure hunter. After that, stuff happens, and the fellow who first discovered the island of Avalon and now goes by the uninteresting title of King of Adventurers has sent you and two others off to discover…um, I have no idea. There’s a rock that sang to my party of heroes, and then I filled in a map of a forest. Yeah.

The Legend of Legacy‘s combat is turn-based, which means it has to have more to it than just that to stand out in the crowd. Bravely Default allowed you to either burn later turns or store them up for extra actions at the risk of not being able to do anything later on if you didn’t kill the monsters right away. Paper Mario: Sticker Star requires precise button presses to deal extra damage or survive a bit longer. Some games can get by on simple turn-based combat, but not all. Anyways, The Legend of Legacy takes its leveling system from the classic SaGa games of old, which means characters don’t gain levels per se, but rather parameters and abilities based on how they acted in a fight. Ideally, this means that your sword skill levels up the more you attack with it, you gain more HP by taking damage more often, and so on, though it can feel random as it dishes out these upgrades. One nice touch is that your party is automatically fully healed after each fight.

I will say, while I abhorred filling in maps for the DS remake of Final Fantasy IV, it seems kind of fun here. Heck, I suspect that if one is fast enough they could fill in the maps quickly while still avoiding on-screen enemies in pursuit. I’ve not done this yet, but once you complete a map and all its sub-areas, you can return to town and sell it for big money, which is st in The Legend of Legacy. I know not what st stands for–stitches, perhaps–but it is an acceptable currency, and that’s enough for me.

Visually, The Legend of Legacy is pretty. It has a pop-up storybook element to its dungeons, with trees and rocks and strange, singing structures lifting up from the ground as you get closer, filling in the world around you. Not quite to the snuff of Bastion, but the idea is the same. Back in town, the game uses that zoomed out trick from Bravely Default, pulling the camera in closer as you move around and explore the inn, shops, and local inhabitants. The character designs are neat, and I almost selected the strange frog warrior because, c’mon, it’s a frog warrior, but decided to go with Meurs, which the game defaults to. Either way, I managed to recruit the frog warrior to my team in town later on, so I guess it doesn’t ultimately matter who you start with if they all team up in the end.

I’ve only put an hour and a half into The Legend of Legacy, and I’m seeing a lot of reviews call it a slow grindfest with no incentives, which is worrying, but we’ll see how things progress from here. As one knows, I’m okay with a game heavy on grinding, though I do like to be constantly working towards something in the end. If it’s just more singing rocks, then this legacy might not last very long.