This Kung Fu Rabbit will save every single sparkling carrot 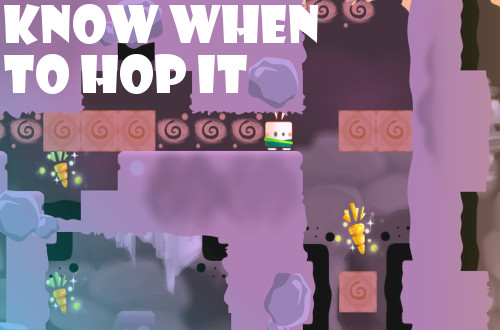 This month’s buffet of PlayStation Plus games is indie-themed, and while many in the comments are crying foul–or just plain crying–over the lack of AAA quality free digital downloads of brand new $60 retail releases, I’m more than thankful for the bite-sized adventures. Right now, with my backlog as large as ever and my current pipeline of in-rotation games all still vying for my attention, I’m more inclined to try something teeny yet satisfying than dipping into Batman: Arkham City or Thief and knowing that I have a long road ahead to finish them off. Which brings us to Kung Fu Rabbit. The game, not the animated feature.

It’s a cute platformer starring a rabbit that evidently knows Chinese martial arts, and I do not mean that condescendingly. It’s cute, it’s a platformer, and there are kung fu moves to use against dark, shadowy enemies. All of that is fact. For the titular kung fu rabbit, life in the temple hangs by a thread, with Universal Evil, represented as a big black orb-like being, striking again and kidnapping all of your disciples. Somehow, only you managed to escape, and you are now on a quest to rescue everyone, while also collecting as many carrots as possible, since they are the currency to buy upgrades and one-use items. I think that’s right; I stole some of that from the game’s description page, as the plot is revealed via wordless comic pages and be a little tricky to follow.

In Kung Fu Rabbit, you can jump…and that’s more or less it. Just kidding. You can also wall jump or lightly cling to walls, sliding down them slowly. Also, when you get near an enemy and its weak point, the rabbit will automatically do some kung fu maneuver and take it out. There are a bunch of levels separated into three worlds and a bonus cave, each requiring logic, precision, and agility to complete. There are three small carrots to gather, as well as a larger, shinier carrot worth double, which always respawns if one wanted to, or needed to, grind for currency. Every now and then, one of these carrots is hidden or harder to grab, requiring some extra attention.

What kind of magical things can one buy with lots of carrots, you surely ask? Let me tell you. First, I got my rabbit a new Mexican-themed outfit because…well, I don’t have to explain myself to you. There’s also one-time use items that can clear away enemies from the map, as well as other martial arts moves you can equip. To be honest, it’s not entirely clear what everything is as nothing has any kind of descriptor attached to it, just a button to press for purchase and donning. Seems like you can only equip one artifact–or artefact as the game likes to spell it–and I have no idea if the ones I bought prior are stacking on top of this. Again, some words would help, and not just on the loading screens.

Kung Fu Rabbit opens innocently enough, but the levels do ramp up in difficulty over time, introducing elements like vanishing platforms–everyone’s favorite, right?–and skybound enemies that can only be taken out by dropping down on them from above. Still, I’m chugging through this game relatively fast, popping lots of Trophies and getting perfect runs left and right. This is not me bragging, but questioning the touted “hours of gameplay” promised. I suspect I’ll be done kung fu-ing in another night or two, which again, is fine for me right now.