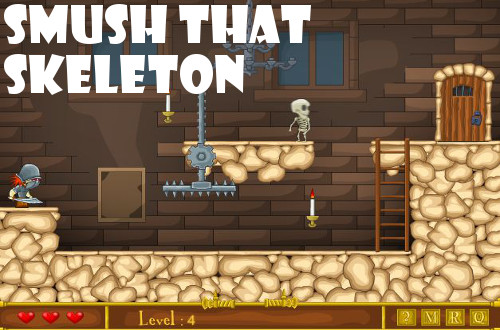 All right, a slice of honesty here: I didn’t play Dragon Quest the other day in what one might consider…a legal manner. I gave it a fair shake through browser-based emulation that I will not link to here. That said, while performing a Google search for this possibility, I stumbled across another game called Dragon Quest, playable over at the Armor Games website. Here, I’ll happily link to it. To me, it is a big and bold move to name your game the same title as that of a beloved franchise some nearly 30 years in the making. Either it’s a quick grab for knowledgeable gamers’ attention–hey, it worked on me–or there’s a specific and unchangeable detail to the plot that requires such titling.

Here’s the gist: in this Dragon Quest, one must explore a deadly castle on a mission to get back a stolen best friend who was kidnapped by a dragon. I mean, if that stolen friend was named Princess Gwaelin and change the dragon to the Dragonlord, then we’re one in the same with that other mega-popular Dragon Quest. Still, this isn’t an RPG where you have to select the stairs menu option to go up or down staircases, but both titles do have a fixation on finding keys to open locked doors. In fact, that’s the only way you’ll save your stolen friend here, as well as dodge that dragon’s attacks in three separate boss battles.

I’m going to use quotation marks to highlight the descriptive text the creator of this Dragon Quest wrote when describing his or her creation. Basically, there are over 20 levels of “insane physics puzzles” that you need to solve using the “twitch reflexes of a platforming game.” I take issue with both of these claims. Insane is a descriptor better saved for puzzles like late-game Portal or Fez or Silent Hill‘s poetry riddles, not figuring out how to smush the skeleton to get a key to pop out; there’s only one way to do it in each level, and the solution is visually telegraphed based on whatever new elements are added each time. As for the twitch reflexes, you move no faster than Mario without the run button, with none of the momentum. You can jump and change direction in midair, which helps once or twice, but otherwise there is no need to keep your finger hovering over the keyboard for the swiftest of key presses.

For a soldier decked out in shiny armor and wielding a sword, the hero of Dragon Quest is quite the pacifist. He never directly kills a skeleton with his blade, often using the environment around him and the skeletons’ dim wits to do away with them. You use the sword to hit switches or cut ropes mainly. When it comes to battling the dragon, which you do thrice, the soldier must avoid the dragon’s fireballs and attacks, using them against him to deal damage. I’m not here to say I need man on dragon violence to satisfy me and my dark desires, but thought it was an unusual observation nonetheless. I wonder if it was a conscious choice or something that happened due to the nature of the puzzle mechanics.

In the end, Dragon Quest is a mediocre way to kill fifteen minutes and mildly flex your brain muscles, but it probably should’ve been called something more like Door Key Quest or The Mighty Quest to Smush All Skeletons. Here’s hoping that the next time I’m talking about Dragon Quest on this blog of mine, it’s related more to that Enix joint, even if I have to admit to being killed again and again by red slimes. I’m okay with violence against them.

Not the Dragon Quest
We all know, find stolen friend
Through physics puzzles