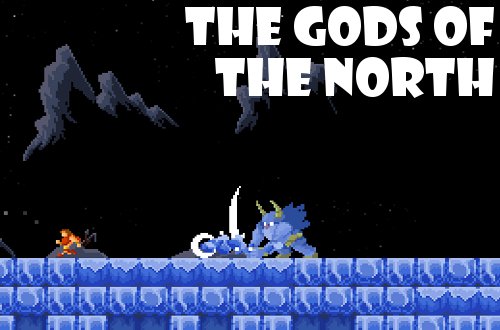 At some point, I won’t feel the need to address how long the current blog post’s subject has been sitting idle in my hands, but I can’t help and show the world that I’m a pretty slow gamer despite the swath of titles I seemingly touch over a year’s time. Heck, we’re almost past the 50 mark for 2015. You may notice that not many of these are what people would describe as “current,” and so far the newest titles I’ve played this year include Super Mario Maker, the full release of Broken Age, and LEGO Jurassic World. Everything else has been from years past, which does not bother me in the least. Anyways, Tiny Barbarian has been twiddling its puny, barbaric thumbs in my laptop’s videogames folder since…well, early 2011.

To tell you about Tiny Barbarian is to tell you about Robert E. Howard’s short story “The Frost-Giant’s Daughter,” which was published after the author’s death. It’s set in the pseudo-historical Hyborian Age and details Conan pursuing a spectral nymph across the frozen snows of Nordheim. It got rejected as a Conan story, and Howard changed a few names to get it to print, but at its heart, it’s an early adventure of the young barbarian. The game does not have any text, except for the very start, where it mentions being inspired by this short story, and you can see its influence as this wee barbarian travels across a cold landscape, little hearts appearing about his head as he spies that spectral nymph too far off in the distance. Unfortunately, the love doesn’t last long, and everything from skeletons to wolves to even the spectral nymph herself set out to kill this small man with a burning passion.

All in all, this is an action platformer, and a short one at that. I found a speedrun-like playthrough on YouTube where the player didn’t die once and finished Tiny Barbarian in about nine minutes. Kudos for them. For me, it was more like half an hour and multiple deaths, especially against the end bosses. Your tiny barbarian can move to the right, do a single jump, and attack with his sword, doing a three-hit combo if the key is punched in succession. That’s it. Along the way, you need to jump over pits of spikes, watch for falling icicles, and kill enemies in your path. There are coins to collect and, naturally, glistening Thanksgiving-worthy turkeys to refill your health.

The checkpoints are fairly forgiving, but the difficulty really ramps up right at the last few sections, where timing–and hiding–must play with each other, and I nearly walked away out of pure frustration. It also didn’t help that I was using a keyboard to play a platformer. I eventually developed a strategy that saw me charging forward at full steam, with little care to how much damage the tiny barbarian took, so long as he crossed that checkpoint and could restart there with full health. Yeah, I’m pretty heroic. See, there’s no way I can move on from this to things like Volgarr the Viking or even that dusty copy of Maximo: Ghosts to Glory for the PlayStation 2.

Evidently, a successful Kickstarter that I knew nothing of helped bring about Tiny Barbarian DX, which looks bigger and better from all corners. I’m digging the colors, and a lot of the barbarian’s animation looks untouched, which is great to see. Slice up those monsters, little man! Still, perhaps if I’m feeling like a masochistic dip back into the retro worlds inspired by pulp fiction I’ll give this a shot. Until then, remember–it’s not the size of your barbarian that matters, but how he handles himself when stuck between a pack of wolves and an angry, fireball-tossing spectral nymph.