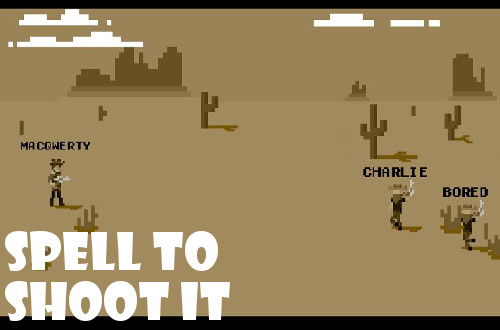 You’d think that, having been copyediting for almost a third of my life now–a couple years in college after I switched from pursuing art something-or-other to journalism and then almost ten years in the big, scary, real world–that I’d be more into the niche spelling genre of videogames. Y’know, things like Typing of the Dead and Icarus Proudbottom Teaches Typing, where the goal is to spell a word, often fast, for some kind of result, whether it is shooting a zombie in the head or moving on to the next task. I may not be a fast typer, but I’m a pretty good speller.

Jack MacQwerty doesn’t try to do too much differently with this small, but strong sub-genre, but it is cute and quirky and has fun with the mechanics nonetheless. Basically, you play as the titular sheriff, taking out opposing cowboys and bad guys by typing their names. Dun dun dunnn. Sometimes their names are traditional, like CLINT or CHERRY, and other times you’ll be feverishly hitting the keys to finish names like ISENGARD, FART, or IDAREYOUTOKILLME. Not going to lie, I totally guffawed when I saw an enemy called SHRECK quickly followed by THEMASK.

When you run out of ammo, type RELOAD to reload, which makes sense and totally gets under your skin when you hit the wrong key and have to start all over while bullets zoom your way. It’s like missing that active reload in Gears of War when you need it most. Later, you’ll want to avoid shooting bystanders with names like DONOTSHOOT and INNOCENT. Also, if you lose enough health, type HYDROMEL for a swig of power and rejuvenation, not that I believe honey-based liquor contains such powers, but that’s videogames for you. Personally, I go right for the raspberry iced tea.

Ironically, for a game about spelling, there’s quite a number of typos on both the game’s GameJolt page, as well as in the “how to play” menu within Jack MacQwerty. Not sure if they are there to be funny, but the professional part of me doubts it. Other than that, I enjoyed my time in the word-littered Wild West, and the retro aesthetic does a fine job of not getting in the way of either the fun or the jokes. If you have a few minutes to kill and like spelling out funny words really fast, give it a shot. Happy trails!