Tilt every platform to make it through Through 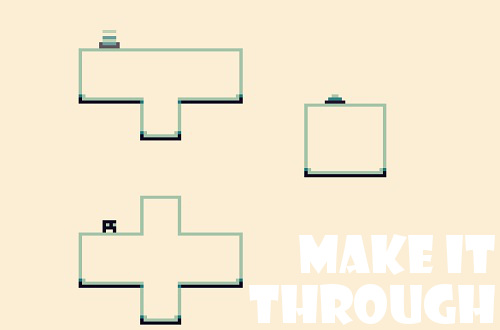 Here’s the unfortunate reality: I will never have enough time to explore all the game jams out there that I want to explore. I’m still not even close to seeing all the entries from GameBoy Jam 3, of which there are 237 in total, and I’ve tried out a whooping three, each of which had something unique or fun to offer: The Tale of Kelda, Roguelight, and Meowgical Tower. Now here we are with a further 181 creations for the next iteration, the rightfully named GameBoy Jam 4, and I don’t know what to do with myself. Guess I’ll play something.

Through is a short, proof of concept puzzle platformer starring a tiny black pixel that could probably befriend the likes of Boxboy and the doomed hero from Disposabot. There are twelve levels in total, with the goal being to reach the teleport pad; however, it’s not always a straight path to it, and this is where tilting takes over. By pushing our tiny retro pixel soldier against a wall for a second or two, he or she or it can pass through, turning the wall into empty space and reshuffling the other platforms around. It’s a bit mind-bending, and I never really saw how the world shifted or was going to shift, like one eventually did in Fez, but if you kept playing around with tilting this way or that, the exit would get closer and closer.

The twelve levels here are not difficult, especially the first three that act more like a tutorial than anything, and so Through is more of a casual playthrough, where you try pushing against a wall and seeing what happens. If it doesn’t work out, jump elsewhere and push another wall. Floor spikes make an appearance only in the final level, and those kind of dangerous elements could have been introduced earlier to create some tension or force players to find an alternate path to the exit. All of this is backed by a looping soundtrack of bloops and bleeps, though it works well enough.

A “To be continued…” message pops up after you finish Through‘s final level, and I do hope we get more from this. The mechanics are there, but a little more variety could help, as well as a smidgen more art, though the simple graphics help create a lonely aesthetic. The game’s developer goes by the username goshki, and I’m not familiar with any of his other work, but I’d love to see this warp maze puzzle game expand into something a bit trickier, more demanding. Personally, I think it’d be a great fit on the Nintendo 3DS, especially if there’s a level editor involved, wherein we can then see what others can create with this idea. All right, I’m off to get a cup of coffee, and I think I’ll just push against the kitchen wall afterwards and see where it takes me.