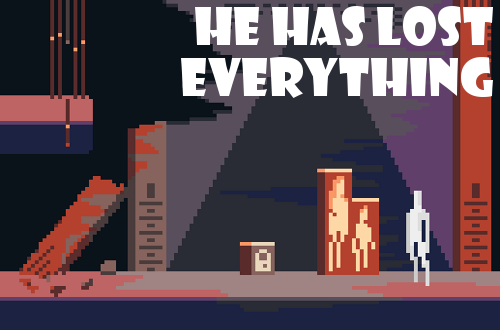 It’s not hard to see that I appreciate just about any game with a low res retro style to it. It makes my imagination work ten times as hard. Some recent notable examples include A Place in Space, Bernband, and A House in California, but we can dig deeper and see that I’ve been into this style since the heydays of the text-based murder mystery Sleuth on the family computer. To be fair, that game’s retro look was due to it actually being a retro game and using ASCII characters as graphics, released in 1983 by Eric N. Miller of Norland Software. Anyways, IAMJASON is another great runner to carry the “less is more” torch for indie games, delivering a somber, unsettling story through traditional mechanics and a visual style that has you determining for yourself what you are seeing.

IAMJASON is a point-and-click adventure game set in a dystopian other-realm where the colors pink, purple, and orange reign. The long and short of the game’s plot is that you must help Jason defeat the corruption, and to say anything else would ruin a lot of the discovery. The game was developed by Calico Reverie for the Monthly Adventure Game Studio (MAGS) competition in February 2015, which is a 30-day game dev challenge. I believe the theme for that month’s challenge was “losing something,” and IAMJASON is successfully all about that, whether it is in the form of family or memory or even meaning.

Mechanics are what you expect for the genre. You have an inventory to collect items into, as well as four commands–go, use, take, and look. Interestingly, the text you get from looking at items or trying to combine this with that is presented largely at the top of the screen in single word blips, as if the protagonist is really thinking about every word. You could almost imagine a “DOES. NOT. COMPUTE.” joke to pop up during some puzzle error, but the game never breaks from its seriousness. This goes the same for IAMJASON‘s soundtrack, which is low, peppered with muted bleeps and bloops, as well as the occasional burst of static acting as a drum beat. It works magically to create an atmosphere of dismay and disinterest, of broken beings continuing to just go through the motions. Many of the puzzles are logical even if you are dealing with fairly illogical concepts and items, such as daemon robots, passcode mechanisms, and power cores.

Unfortunately, I ran into a nasty, game-stopping bug in IAMJASON. Basically, I solved a part of a puzzle’s process earlier than expected, immobilizing a daemon robot to allow me to get a key item, but in doing so this locked the door to the room said robot is now trapped in. To complete the game, I needed to extract something from the wonky robot, but the door refused to open for me. I had to watch the remaining five or so minutes of gameplay on YouTube, which, while not the worst outcome, was still a little disappointing.

Other than that, I heartily recommend you give IAMJASON a go. It’s about thirty minutes of gameplay in total–so long as you act accordingly–and hopefully that previously mentioned bug is fixed or will soon be. Regardless, this is a strange and fascinating world worth ridding of corruption, even if it means losing everything.