All cities are mad, and that includes Bernband’s The Pff 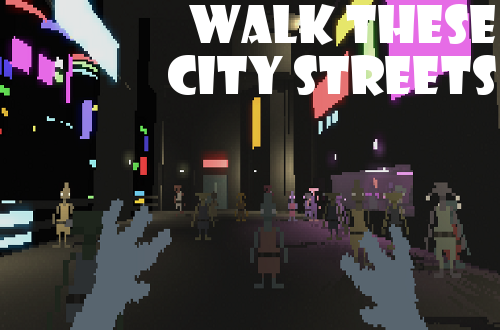 There are a few cities I’d really love to visit in the near future, with no set goals. No scheduled events, no locked-in attractions to see, no deadlines. I just want to be there and observe, to walk around like I’m stuck in ankle-deep quicksand. I’ll limit the following list to inside the United States, but let’s go with Boston, Providence, Charleston, Seattle, and Austin. Perhaps in that order. Actually, it doesn’t matter; I’m not picky. Now, I’m not exactly sure where Bernband‘s main city is located, but I can cross it off my imaginary list, as it has been both enjoyed and explored.

Bernband is, to mock the Gone Home haters, a “walking simulator” set in the strange city called The Pff, which has me scratching my head, but I guess that’s the point. Thankfully, I don’t have to say it out loud, only write it. Immediately, I feel like a foreigner, stepping foot into another world. An artificially pixelated one at that, which is a bit nauseating at first, but the sensation fades. Same goes for the hypersensitive mouse speed, which is akin to a first-person shooter, something I didn’t expect here.

The goal of the game–if you want to label this a goal–is to simply explore and take in the culture, and it’s fairly linear and uneventful at first, but you’ll eventually begin to see some interesting sights, as well as have options of where to go next. You move with the WASD keys, can jump, and pressing “escape” instantly closes the program–that’s all there is here, with no HUD or even a pause menu. I played for about twenty minutes and stopped after a hole in the floor returned me to the starting area, though I’m sure I didn’t see all the sights.

Despite being set in an alien city, there’s a lot of familiarity to gawk at, such as a hopping bar scene, a classroom, a car park, and so on. Plus, elevators and doors, though the elevators are more like transporters. Instead of being peppered with a range of human bodies, rooms and hallways are stuffed with alien lifeforms of all shapes, colors, and quirks. Actually, for a quick moment after I launched the game, I thought I was back in Calm Time, which had me panicking as I didn’t want to have to murder everyone in The Pff while chasing down a ghost. Thankfully, this is not a spooky game, though there is strangely a sense of coldness and dread, especially once you move away from the livelier sections of town and end up in, more or less, empty hallways. Music and sound effects are sparse, but used effectively, like that alien tinkling away in the urinal or the one tooting its horn.

In one way, it’d be nice to see Bernband expanded into something more traditional, with a full-blown story and characters and some kind of goal to complete, whether it was reaching a destination or collecting a set number of items along the way. In another, that might ruin what was captured here, that feeling of being a stranger in a strange land, where all you can do is look upon your surroundings and learn.