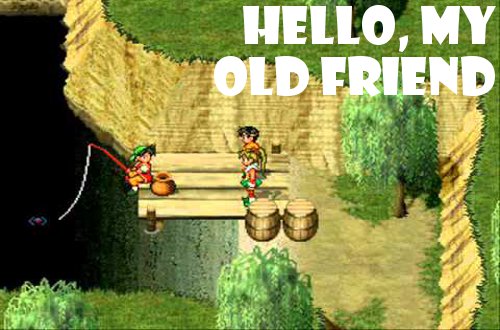 When you start Suikoden II for the first time, the game checks to see if you’ve previously played Suikoden. If you’re a good l’il gamer and still got save data on your PlayStation 1 memory card, you’re in luck. Well, maybe. Not that Konami tells you why, but there are plenty of bonuses to reap from already playing the previous game, the greatest being that you can actually get Tir McDohl’s son to join your side and fight along Hodor, Nanami, and friends. It’s a little tricky and troublesome, but totally worth the effort, as well as the short stroll down memory lane.

First off, here’s a really good breakdown about what changes can happen for characters from the first game that do appear in Suikoden II. It all depends on how far you leveled them up during your time fighting Barbarossa, but only if they were level 60 or above. There are other perks for starting equipment, runes, and weapons, too. Hmm. Given that I ran through Suikoden in twenty-ish hours and focused on only a small, select bunch of fighters, I really don’t think anyone got that high up. Sure, I could check, but that would mean removing Suikoden II‘s disc from my PlayStation 2, something I’m not yet ready to do.

Those stat bonuses aside, the real reason to let Konami know you played Suikoden is for the chance to “recruit” Tir McDohl’s son, aka the Young Master, aka Pauly (as I named him). And I say “recruit” in quotation marks because he does not actually count as a Star of Destiny, nor does he take up residence in your castle headquarters, but more on that shortly.

So, the soonest you can find McDohl is right after the big, multi-tiered battle with Luca Blight. In Banner Village, you can speak to a young kid called Ko who is dressed to the nines like some doe-eyed Hodor cosplayer, and this kid will inform the gang that someone named “McDohl” is staying at the inn, spending most of the day fishing. Well, except, in my case, McDohl is called PcDohl due to Konami’s extremely poor translation job. Basically, for each capital letter you have in your original McDohl’s name, those capital letters will be transferred into McDohl’s name in Suikoden II, replacing the original letters one by one. Much like I did with Suikoden‘s bad grammar, I’ve been taking a lot of pictures of wonky writing and translation problems for a big post after I’ve beaten Suikoden II. Stay tuned, grammar gurus.

Anyways, since I recruited all 107 Stars of Destiny before Suikoden‘s final battle and got Gremio revived (spoilerz!!!1!1!), both Pauly McDohl and Gremio appear in Banner Village. You then go on a short side quest to save Ko who got kidnapped by bandits, eventually ending back up in Gregminster and Tir McDohl’s household for supper. Now, I’ve written about what Gregminster means to me before, so returning to it was such a delight, as well as a swirl of emotions and desires. You’ll find Gregminster has changed, though not too much, and many familiar characters pop up, though it saddened me that former stars like Cleo and Pahn did not get new portrait artwork–or any portrait artwork, for that matter. The birds remain as skittish as ever.

From this point forward, you can add McDohl to your team for turn-based battling purposes. But only him; sorry Gremio, you drew the short straw once again. And you should add him. His unite attack with Suikoden II‘s main hero is impressively deadly, able to hit all enemies in one go, not causing either to become unbalanced either. It’s essential for survival in some of the tougher parts where monsters roam. But here’s the rub–if McDohl is removed from your party, you have to travel all the way back to Gregminster to ask him to rejoin you. It’s not a simple fast travel hop with the Blinking Mirror; first you travel to Banner Village, then have to go through the forest, then get to Gregminster, then back to through the forest, Banner Village, take a boat to Radat, and lastly fast travel back to HQ. It’s lengthy and annoying, and the game automatically removes party members at various points during the plot, so you can’t rely on McDohl being there all the time, when you need him most.

Still, it’s a special slice of the game, one to pursue when not waging war and very rewarding for those that put in the time and effort to get the best results in the original Suikoden. Since Suikoden III is on the PlayStation 2, and memory cards only work for their respective consoles, I don’t think any data or secrets from Suikoden II will carry over, but we’ll see. Imagine if they eventually make Suikoden VI (unlikely, I know) and you can have a six-character team made up entirely of the series’ heroes? Imagine that!