Careful cooking is love and a minigame in Suikoden II 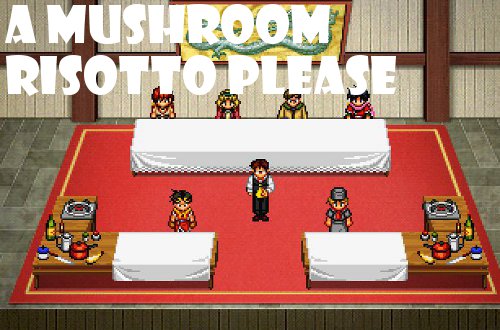 They say that the loveliest thing you can do for someone is cook them a meal. Alas, I’ve never been a great chef. My culinary skills sit somewhere between a good bowl of ramen noodles and a tasty tofu stir-fry with diced up vegetables. Over the summer, I learned how to make a fantastic cucumber salad. But here’s a shocker; I’ve never baked anything in my thirty-one years of life–not a cookie, not a cupcake, not a pie. There’s too much exact science involved in baking, and that terrifies me. Plus, I’m always worried that because I have such low standards for food that what I might think is amazing someone else might view as disgusting, and then I’d hate for them to consume it. In short, this has resulted in an adult life where I do very little cooking for others.

Anyways, how does all this relate to Suikoden II? Well, if you explore your castle headquarters enough you’ll eventually stumble across a man named Hai Yo, who is looking to open up his very own restaurant. Naturally, Hodor thought Dah Castle would be the best place for this because we obviously see so much foot traffic. With Hai Yo now an official member of the Dornish Army, the restaurant is magically put together instantly. Oh, and all those recipes you’ve been collecting so far and throwing in the warehouse for storage can finally be put to good use. As you visit him, you’ll kickoff a lengthy minigame-heavy side quest about Hai Yo and other touring chefs that want to compete against him. Don’t worry; Hodor is deeply involved as his sous chef.

Each cooking competition in the still-very-serious Suikoden II starts out the same way, with you visiting the restaurant to find Hai Yo in the midst of a confrontation. Almost resembles a playground fight, with a circle of people gawking. Hai Yo’s opponent will challenge him to a cooking contest. You then have the option to jump to it or delay while you search for more recipes/ingredients. At this point, I’ve only done one cook-off, but I was so excited to get to this moment and re-experience the wonder and weirdness of it all that I just can’t stop the words leaking from my fingertips.

Hai Yo’s first rival chef is the unfortunately named Yu Kum. There’s a little introductory scene wherein the chefs are announced in a boxing match manner, though Dah Castle’s cook gets some wicked strobe lights, and then the panel of judges is revealed. There are four of them, and they are randomly selected from your group of thus-far collected 108 Stars of Destiny. They are not simply pretty faces though, as each judge does have a food preference, which correlates to how they ultimately score everything. For the Hai Yo/Yu Kum fight, I think my judges were Gengen, Nina, Gilbert, and Ellie. This random element keeps each competition up in the air, so to speak, as you never know who will judge and what they prefer to eat.

After the judges are revealed, Hodor must select an appetizer, a main course, and a dessert from your growing collection of recipes. You can add spices to each recipe to turn them into something else. For example, a salad with salt turns into pickled cabbage. The true secret to winning is as so: first, pick dishes that have a high “deliciousness” rating, and second, remember that Suikoden II was written with the Japanese palate in mind. While a simple bowl of ice cream as a closer might make sense in an American mind-frame, it might not in Japanese culture.

Once you are done making your choices, sit back and watch Hai Yo and Hodor go to work. You can also watch the rival chefs too, but I prefer the former. There’s some really solid animation work here, much of which is particular to the dishes you selected. There are a few meters on the side of the screen showing you how long something is taking to cook, but you can’t interact at all. Then the judges taste the courses and score accordingly, with a final tally tossed up at the end of dessert. I beat Yu Kum by about eight points, earning me his trusted tomato soup recipe.

In spite of it really just being a bunch of menu selections and astute attention to detail, the cooking mini-game is not very interactive. Still, it is a ton of fun to go through, and I’m looking forward to the next competition, as well as gathering some more ingredients and recipes. You can even have Hai Yo make you dishes to use in battle, some with strong effects. I just don’t anticipate having to do that fishing mini-game again, but I know, at some point, I have to. Ugh. Animal Crossing: New Leaf and Disney Magical World have spoiled me on simple, satisfying fishing gameplay, and everything else is too archaic to grok. But how else will I make that delectable salmon dish glazed with soy sauce and brown sugar?