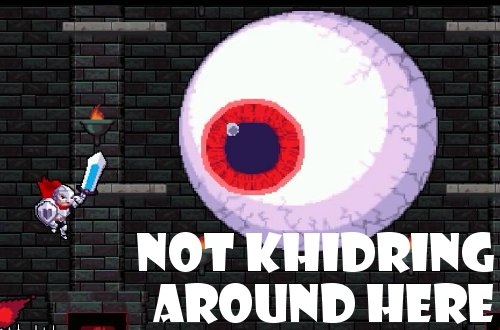 I don’t completely understand how this happened, but this is the first post I’ve dedicated to writing about Rogue Legacy, despite playing it off and on for the last few months. I mean, generally, save for some exceptions, I write about every game I’m playing–at least once. And yet, Rogue Legacy never really got in the spotlight despite accidentally eating up a few hours of my Extra Life stream; hey, it’s rather addicting. It’s also completely different than Rogue Galaxy, an awesome Level-5 JRPG for the PlayStation 2, but with both names being oh-so-similar I think I mixed them up a bunch when speaking. My bad. This post will now only be about the indie platform game with rogue-like elements, not the one starring a young, rebellious Jaster Rogue.

Rogue Legacy from Cellar Door Games is an indie platform game heavy on giving you one chance to win. Its biggest hook is that you are constantly playing as the child of the character you last played as, often gaining some of the previous parent’s traits while showcasing new ones. These greatly affect how you explore the randomly generated castles, as some traits, like blurry vision, only let you see so far ahead, while others, like two left hands, change the direction you normally cast spells in. There are also many other traits that have little to no impact on gameplay, just there for decoration. My personal favorites are dwarfism and ADHD, meaning you are both small and fast. Couple that with a good spellcaster, and enemies drop like flies as you zip on through.

While the early deep-dives into Rogue Legacy feel a bit aimless, there is an overarching goal to achieve: defeat four bosses, which unlocks that large door at the start of the castle, wherein you’ll find the final boss. However, beating those four bosses is no easy task. At this point, I’ve taken down one, namely Khidr, the Gatekeeper, in the opening section of the randomly construed castle, and that was only after something like 50+ deaths and enough money to level up my heir to fighting status. Khidr is difficult because it has a projectile attack that spirals around its eyeball body, and there are spikes on the floor to avoid. I did encounter Ponce de Leon, the Sentinel, in the Maya zone, but got my assassin butt handed to me swiftly.

The truth of the matter is that every run is actually more about getting as much gold as possible rather than taking on bosses before you are ready for ’em. All upgrades cost gold, and usually it is a hefty amount–think 500 and higher, at least. Plus, as far as I can tell, the prices continue to increase as you grow in skill. Whatever gold you don’t spend on upgrading the castle can be spent before heading inside. There’s an armorer for weapons/gear and an enchantress for runes, as well as a dude that will lock the previous castle’s layout for you for a price, though it does repopulate with enemies. You have to give up the remainder of your gold before venturing into the castle, though there is an upgrade path to go down that lets you keep a small percentage of it. Regardless, get that gold and upgrade each and every time you die.

Not everything in Rogue Legacy is fascinating. The “story” is told through sporadic journal entries you randomly stumble across, and even then, they aren’t the most exciting or illuminating to read. You’ll occasionally come across a statue in the castle, which you can pray to for assistance, often giving you a bonus ability for that single run; however, unless you know what each power-up is already, there’s no way to know what you got. It’s kind of The Binding of Isaac in that respect. There are also Fairy Chest and special rooms that are purposely difficult or obtuse to solve. Still, even in light of that, it is an internal struggle to not keep playing, to not make one more attempt at that boss or get enough gold for that vampire-themed cape that restores HP with every enemy kill.

Strangely, Rogue Legacy is a game I can play for hours, but I actually load it up rather infrequently. Part of that might be my brain warning me not to lose an entire night to castle raiding, I don’t know. I’m sure I’ll get back to it soon enough, and each run is progress, whether it is getting a new weapon to buy or a permanent upgrade to your MP or actually killing a mini-boss. I’ll get through this in due time. Heck, that’s what genealogy is all about.