GAMES I REGRET PARTING WITH: Vigilante 8 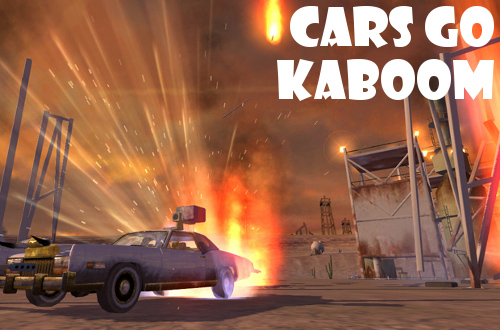 Internet, I’m disappointed in you. I spent at least a half hour scouring your image archives for one, just one, decent PlayStation 1 screenshot of Vigilante 8. Alas, none exist. At least none that suit my Grinding Down style, which is a large, clear picture with good spacing for my silly words on top of it. I’m not asking for much, really. Everything I saw was covered in ugly HUD elements or extremely grainy and whatever–I just grabbed a shot from Vigilante 8 Arcade and went forward, but do know that this post is all about the 1998 car combat release, not its 2008 remake, which I’ve never even touched.

Before I start in on all things alternative 1975, I had to make a decision here because, truthfully, I could’ve done a GAMES I REGRET PARTING WITH for the original Twisted Metal as well, but I felt a stronger connection–and honk in my heart–for Vigilante 8, which is a goofier, more cartoony car combat simulator than Dave Jaffe’s torment tournament featuring a murderous clown driving an ice cream truck. I don’t know. Both are over-the-top and a ton of fun, really, but they each occupy nearly the same space, and so I’d rather write about Activision’s take on vehicular violence. But I cannot deny regretting getting rid of both of these from my collection early on, as I do get that itch now and then to drive around in a non-racing environment and blow things up. At least I have Crash Team Racing?

Car combat games generally have paper-thin stories, and Vigilante 8 is no exception: A band of six desperadoes known as the Coyotes is wreaking havoc across the Southwest, and a band of vigilantes surprisingly called the Vigilantes is out to stop them. This leads to both groups mounting crazy government weaponry on their cars and driving into battle. That’s the quest mode, with levels designed around either blowing something up or protecting something from being exploded. Do that a few times, and then you’ll get a short cutscene specific to the character you picked. There’s also an arcade mode which is pick a car, pick a place, and go nuts.

Again, I dig Vigilante 8‘s aesthetic waaaaay more than Twisted Metal 2‘s, and it really shines in the characters, car selection, and special moves for each vehicle. The leader of the Vigilantes is Convoy, an old cowboy driving a semi-truck. There’s Chassey Blue, an FBI on an investigation who drives a 1967 Rattler armed with a missile rack. I’m also a big fan of Molo, who drove a massive 1966 school bus capable of emitting a dangerous smog cloud. The variety of time-appropriate cars really runs the gamut, and there’s even a special unlockable character that is simply out of this world; spoilers, it’s an alien spaceship. Naturally, each car handles differently and is outfitted with its own special weapon, generally themed with the personality of the car and its driver. For example, Beezwax, the Arizona beekeeper furious at the government for irradiating and mutating his bees with nuclear tests, uses his insect friends in a nasty bee swarm projectile.

To accompany the eclectic mix of cars and drivers, Vigilante 8‘s soundtrack is equally as diverse. Not Chrono Cross, but really–what is? It starts with a pumping disco track that features some very catchy whoop whoops. A couple other tracks sound a bit more rock-n-rollish, heavy on the distortion pedal. There’s one track that would make any of those 80s hair-band ballads proud, though I find it a little too cheesy for my ears. Regardless, the majority of the beats are steady enough to bob your head to while driving around, launching missiles at enemy cars.

While I had a good amount of two-player games as a young high school videogamer, I didn’t actually end up playing many with a second player. Friends were limited, see, and when people got together, we ended up playing more Magic: The Gathering than anything else. That said, just like with Tony Hawk’s Pro Skater 2, I remember putting in a lot of solo time with Vigilante 8, definitely seeing all the endings, but also just free-wheelin’ it in arcade mode, figuring out what buildings could be interacted with or practicing how to launch special projectiles. I never got to play its sequel Vigilante 8: 2nd Offense, though my best friend’s little brother had it on the Dreamcast and I watched him goof around in it now and then, but maybe, just maybe, I could see if the Xbox 360 remake Vigilante 8 Arcade is any good. Can you dig it?