Mining my experiences as a cowboy steambot in SteamWorld Dig 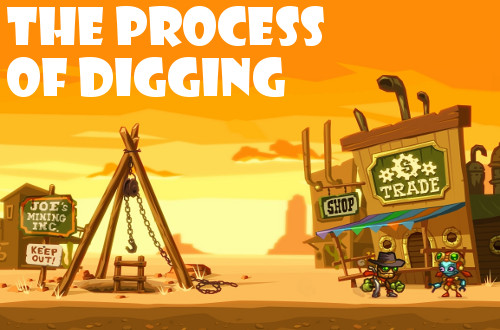 I’ve never gone very far underground in my thirty-one insipid years on this planet we share, and that’s fine. A few family vacation one-offs where we’d explore a cave with a tour group or something like that, but never any personal expeditions. Much like the ocean, the underground is terrifyingly expansive and filled with too much unknown. Also–very dark. There’s a 2006 horror movie called The Descent that seems like the most scariest thing possible, as it follows a group of British spelunkers down into the deep dank depths of some labyrinthine caves in North Carolina; on top of that alone, they get pursued by flesh-eating monsters. No thanks.

If I was to go underground, I’d hope it would look more like SteamWorld Dig, all colorful and bouncy and peppered with kooky characters like Lola, who runs the bar in Tumbleton and acts as a respawn point, and Hank “Cranky” McCrank, a repairbot who helps you upgrade your digging tools. I mean, just look at the game’s hero Rusty; with his cowboy hat and big, green metal hands, he appears more than confident to handle whatever is lurking deep beneath the town, and so I’d go with him, though still not too far down.

The story here is slight, but solid enough to give Rusty a reason to dig deeper into the mineral-infested ground. Rusty the steambot wannabe-cowboy has inherited his uncle Joe’s mine after Joe apparently lost his life plunging into its depths for secrets. Naturally, curiosity screams, and Rusty takes up the call (and pickaxe) to continue his uncle’s journey. That’s it for now, and the characters aboveground in Tumbleton are essentially menu options and quest-givers at this point, but that could all potentially change down the line.

There’s a cycle to Rusty’s cavernous adventuring, and it is thus: dig down into the mine, gather as many minerals as you can hold, return to town, sell your stash, purchase upgrades to help you dig deeper, gather more resources, and survive longer. Much like Rogue Legacy and Spelunky, it has that “one more run” vibe to it, because even if you don’t get far or gather too much, every piece of trashium or copper sold is all feeding back into making Rusty better, stronger, more awesome, which promotes sojourning a wee further. You can really only go so far as your tools allow, and eventually you’ll run out of lantern light or hit dirt you can’t dig through yet. Or maybe even some tough critter-crawly enemies. Either way, you have to hightail back to sunlight, and you can either climb back up the hole you dug or find a fast travel point along the way.

On your way down below, you’ll also come across special cavern entrances that basically lead to a platforming section or ability-testing area. You can find some good valuables in these spots, as well as new abilities, like special drill arms, wall-jumping, or boosting upwards from a stationary position, which uses steam, a finite resource to also keep an eye on. These aren’t very tricky so far, and often give you a reason to travel up, left, or right rather than simply down all the time.

Right. I’m one of those crackpots that thinks Super Mario Bros 2 is a more enjoyable time than Super Mario Bros 3, and a favorite section of mine is when you have to travel downwards through layers and layers of sand. You do this by digging, by hitting the “pick up object” button, and the Princess–who else would you even bother playing as, honestly–will lift the sand beneath her feet away, causing her to fall into the next line. Keep doing this, and eventually you’ll get through it. You make your own path, and the enemies will even follow along it just like you. That same idea applies to SteamWorld Dig; how you dig down to the caves or map indicator is customizable, but you also have to be thinking about reverse directions too, about what would make it easier for Rusty with no light to find his way to Tumbleton. Unfortunately, returning to the surface, especially once you really get deep down, is where things become less fun and more of a slog. I thought I read that the underground is randomly generated, so if that’s true, the replayability is at least very strong with this one.

For those with a PlayStation 4 and subscription to PlayStation Plus, SteamWorld Dig is a freebie for the month of November. Even if it wasn’t free, I’d heartily suggest checking it out. So long as you don’t mind a whole lot of digging.