The great wheel of discovery turns again in Suikoden 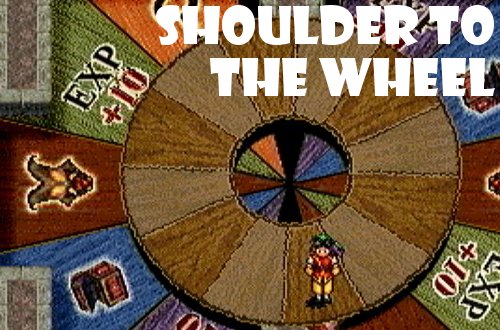 Let’s see, let’s see. Where did I last leave off with my Suikoden progress?

Oh, right. Pauly McDohl and the gang had had their fill of playing Chinchirorin and were preparing to storm a gloomy castle in the middle of an ocean, one evidently guarded by fog, snails with long necks, and a mighty fire-spewing dragon. Don’t worry. We won, though Pauly and Gremio both fell unconscious during the fight and missed out on a largely sweet EXP boost, now a bit behind everyone else in terms of leveling. And so, with all the monsters cleared out of the castle, every treasure chest opened, and it given a proper name, the real meat of Suikoden can start. I’m talking about recruiting members into the Liberation Army and watching your castle expand as people move on in and call it home.

Before continuing on with the next story section, I immediately headed back out to all the towns I could visit to see who I could instantly recruit to the Liberation Army. Some Stars of Destiny are more eager or easily swayed than others; take for instance Onil, a gossip-monger living in Seika. She’s already heard about Pauly looking for recruits and is ready to go, and I think that’s the extent of Onil’s usefulness, but at least she can be ticked off of Luc’s recruit-tracking stone slabs. Other people you can recruit are more useful gameplay-wise, such as Marie–you remember her, the stuck-between-a-rock-and-a-hard-place innkeeper from way back in Gregminster, yes?–who now operates a free inn inside your castle, as well as Sergei who puts in an elevator, which will grow in importance as your castle itself grows in importance. And then there are the fighters you recruit who you can actually add to your party’s formation and see what kind of neat runes they have or special unite attacks, such as Varkas and Sydonia.

After getting all that I could–sorry Lorelai, you’ll have to wait until I’m a higher level–I jumped back on the plot wagon and went to Kouan to speak with Lepant, a wealthy merchant, at Mathiu’s request. This took the gang inside a mansion brimming with robotic enemies, evidently created by Juppo the trickster. Fine, fine. I can fight mimic treasure chests all day long. However, I was once again completely surprised to enter a room featuring Juppo’s masterpiece: a giant roulette wheel of chance, backed by that jaunty, somewhat jarring banjo-lead tune previously heard during, I think, the cups game in Rockland. See above. Anyways, you step on the wheel, it spins you round and round, and you get what you land on. Strangely, there are slices for +10 EXP and -10 EXP, which is an amount so minor that you’d have to land on them five thousand times to really feel any kind of impact. It took me maybe seven or eights go-arounds to land safely on the other side. Again, a strange part of Suikoden that I completely forgot about, but one I have to imagine the developers were excited to see implemented at the time, in a JRPG of all things.

In the room after that, you meet Rock, a man eager to open up a warehouse in your castle. I recruited him as fast as I could hit the button because I’m beginning to struggle with Suikoden‘s old-school take on inventory slots. It’s quite limited, and with Rock’s warehouse, I can now at least store rune pieces, armor, and ? ornaments to my heart’s content until I’ve decided what to do with them. See, each party member can hold nine items, but this includes armor they are wearing, which can take up a maximum of five slots if you have something on from head to toes. I generally try to keep a Medicine 6 on everybody too, which leaves little room for much else, and when you are trying to share equipment with someone but they are full on inventory it can be quite maddening to shuffle things to and fro. It’s definitely an aspect I wish was stronger, but I don’t know if a shared inventory would work either, as sometimes deciding who to carry that Needle or Mega Medicine 3 is a strategic decision for sure.

Right, so, there are some big story moments in Lepant’s mansion. First, you learn that your old Gregminster boss Kraze is in control of Kouan and ends up kidnapping Eileen, Lepant’s wife. Secondly, there is the great return of Pahn, and Pauly McDohl’s previous bodyguard redeems himself, physically placing his body between Kraze and Eileen. Then there is a choice: kill or let Kraze go. All I could do is think of Ted, and so Pauly’s hands ran red that day. Digitally red. Well, no–not really. All that happens is the screen fades to black and you hear a “hitting” sound effect; when the scene comes back up, Kraze is gone, so we’ll never really know what happened there, just like we’ll never know what went down in the Tower of Joy unless Howland Reed decides to stand up and speak. Yup, I’m comparing Suikoden with A Song of Ice and Fire. Pony up.

I never intended for me to be covering my replay of Suikoden in a “let’s play” fashion, but I just keep finding interesting moments to talk about. Again, I haven’t touched this game in over a decade, so there’s a lot I’ve forgotten, as well as many memories tinted by nostalgia. Some of the mechanics are still extremely enjoyable–recruiting dudes–while others I’m finding frustrating–equipping dudes–but I’m glad to be back in this colorful 16-bit world, even if it feels a little less epic and more to the point than I previously remembered. Up next, I guess…elves and kobolds.