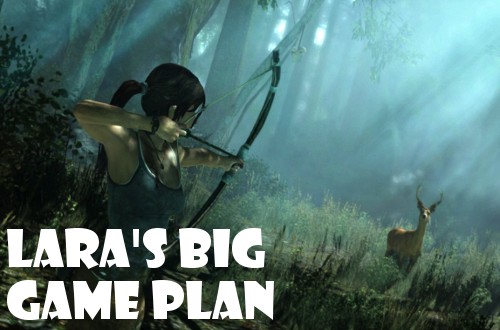 I think I’m just about done with Tomb Raider. No, wait. I am done. Given the new low that I stooped to last night, it’s best that I just put it and its unlocked Trophies, as well as untouched online multiplayer aspect, behind me, orphaned on some storm-hidden, sun goddess-worshipping tropical island, one which, with any luck, I’ll never find again.

Tomb Raider‘s story came to a close a couple weeks back for me. I don’t remember the exact percentage number at the end of it all, but since then I’ve slowly been working towards that soul-settling 100%. Basically, nabbing all the leftover collectibles. Well, that’s not going to happen. Sure, I’ve upgraded all my weapons with every mod available, finished every optional tomb, collected every relic and document from every level that had ’em, earned all the ability skills, and done most of the GPS caches and challenges.

It’s that last mentioned category that will go incomplete, thus robbing me of a full completion rating. Oh well. The GPS caches actually end up getting marked on your map, making them easier to find since they are only glittering lights, but the challenges, which are things like “shoot down eight tiny wind chimes that blend in really well with the background” or “find 10 specific mushrooms in a forest filled with mushrooms” are not labeled on the map. That means you spend a lot of time running around the same environment, constantly clicking left trigger for Lara’s hunting vision in hopes of seeing something glow. At this point, I have two mushrooms left to find in the forest levels, and that seems like an impossible task–even with an online walkthrough–as I can’t tell which ones I’ve already collected and which ones are still out there, being fun guys.

But let me talk about earning salvage in a post-game Tomb Raider world. In order to pay for weapon mod upgrades, you need salvage, which is earned from finding crates of it in the environment, looting fallen enemy bodies, and skinning slain animals. However, the first two–crates and enemies–are quite finite once the game ends, with little to no respawning for both of them. This means that if you don’t have enough salvage by then, you’re going to have to grind for it, and the quickest and easiest animal to kill over and over again like some mindless sociopath are deer, the same forest friend that gave Lara Croft some minor heartache when she first had to kill the beast to feed her tummy.

Let me start at the start. Early on in Tomb Raider after acquiring the bow, Lara is given a quest to kill a deer, with the implication that she needs to do this to stay alive. To eat, keep her energy up, etc. She goes through the hunting motions and even apologizes to the deer as she guts it. This is supposed to be an emotional scene, but it quickly dissolves into just perfunctory videogame mechanics, as gutting the deer earns Lara both XP and salvage. Note, not food. The quest was for food, and the reward was other stuff. I’m not a huge fan of hunger meters–looking at you, Minecraft and Don’t Starve–as they constantly put pressure on you to always be looking for something scrumptious to keep that meter high instead of letting you just play the game, but here, where hunting is emphasized, it would’ve made sense to have Lara kill a deer every now–for hunger’s sake.

Anyways, since killing deer obvious meant nothing to Lara in the end, just a means to more skills, I took her down a dark path for my last half-hour with Tomb Raider. Back in the coastal forest sections, I had her running in circles, assault rifle at the ready, blasting deer to the ground with a single shot, sometimes  popping off a rabbit or two while waiting for the deer population to respawn. When ammo ran out, I took to practicing how far I could snipe a deer with a loosed arrow, as well as how high they could bounce into the sky once I got the “exploding arrows” perk unlocked. Evidently, kind of high.

This sort of obsessive, stalker-like hunting all became methodical, something which I think an archeologist would appreciate, approaching a task systematically, even if that task is basically slaughtering deer after deer after deer, and all for salvage, a secondary currency that lets her grow in power. Strangely, even after all the weapon mods were bought, Lara can still earn salvage, but that only makes the hunting seem even further without point. No thanks. I’m done voraciously knocking down digital deer, though I don’t expect their death-cries to leave my head for some time.