Showing off my cultural superiority in Civilization Revolution 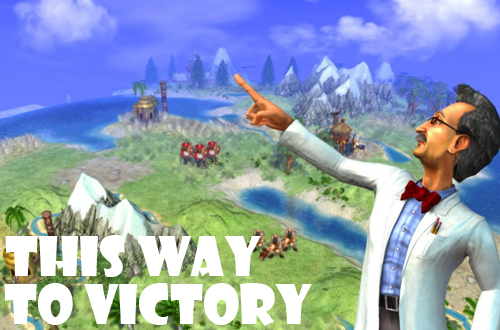 Sid Meier’s Civilization Revolution is one of the two free games Gold members get this month on the Xbox 360. It’s not particularly shiny or new, releasing back in June 2008 for all the expected systems from that time period, meaning the Xbox 360, PlayStation 3, Nintendo DS, and iThings. It’s a simplified turn-based strategy game that mixes historical figures and cartoonish graphics in a fairly addicting manner, seeing that I only played a single round so far, and that entire fight saw Rome dominating all the other cities after just under two hours of back-and-forthing it.

The truth of the matter is that I’ve never actually played a Civilization game before this. Hey–please don’t throw rocks. Oh, sure, I bought Civilization V back during Thanksgiving or Christmas last year when a crazy Steam sale was running, but I’ve still not loaded it up once. Okay, okay…maybe throw a rock for that, but please, not the face. Back in the day, however, I did enjoy a lot of time with Age of Empires on the PC, watching brainless grunts evolve from the early Stone Age all the way to the late Iron Age. I’ve previously talked about my dislike for many RTS videogames, but those are usually military-based and tower defense-focused, and I do enjoy ones more about…well, teaching a group of people how to read or build a stone wheel or harvest crops from nearby fields. Yes, in Civilization Revolution there’s still combat and a need to protect your city while also possibly attacking another, but you can also just grow in culture, money, and fame, and that’s pretty dang cool.

Now, there are four roads to victory in Civilization Revolution:

As I mentioned before, my one game so far took about two hours, and that’s seemingly just how things go. You begin by building units and buildings and Wonders, and each of those things take X number of turns to be completed. While that’s happening, other cities are growing too. Some may befriend you, and others will grow jealous or angry or scared and declare war. You can stave off some fighting by giving other city rulers money or technologies you’ve learned, but it’s never a guarantee for eternal peace. So it’s a lot of small planning and waiting, and I eventually began working on a Cultural victory, building the United Nations wonder to cinch the deal. However, strangely, I didn’t get the Achievement associated to fulfilling this quest, instead earning the one for a Dominance victory. Not sure what that’s about…

A couple quick side notes: I find it hilarious that the Xbox 360 shortens the name of this game to Civilization Revolut’n on all of its dashboard menus. Certainly they could have fit the whole name on there, right? There have to be games with longer titles than this. Or maybe this was just Microsoft not knowing what to do with longish titles back then, seeing as they also ditched Sid Meier’s name too. Also, while this might not matter to many, a few of the Achievements in this game are worth odd amounts, like 3 or 9 Gamerscore; initially, I was freaked out by this, but eventually earned all of them odd ones to balance my Gamerscore back out to a nice even number. That’s just how wild and loose those early days were with the Xbox 360.

I definitely see myself doing a couple more rounds with Civilization Revolution, at least to try out some of the other cultures, as well as attempting some different win victories. Unfortunately, none of this will happen until the weather gets warmer and the living room isn’t painful to sit in for longer than half an hour. Until then.