Ahh, February–the shortest month of the year. As well as the snowiest, at least for 2014, that is. Last year we barely saw any snow, and this year we’re quadrupling down on that cause, and I have to be honest. I’m done. Truly and terribly. No quibbles about it. I’m tired of my car getting stuck in the snow, I’m tired of shoveling snow, I’m tired of walking like a penguin so as to not fall in the snow, and I’m tired of hearing nearly every day on the radio about the potential coming of even more snow. I really don’t mind cold weather, as I’m all about layering and being warm, but there’s a difference between cold weather and stress-inducing snow. Bring on March and green grass and the chance to not wear socks in the house. My body is ready.

That said, here’s a handful of games I played a little bit of this month. 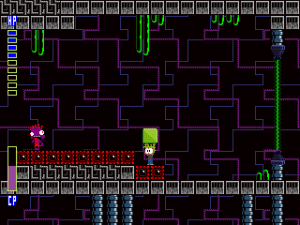 This little indie thing from 2006 is self-described as a block-throwing action adventure game, and that’s exactly what it is. Lyle’s kitty cat has been stolen by some robed witch, and he’s off to rescue his furry feline. Unlike other Metroidvania games, Lyle doesn’t have a weapon–no whip, no gun, nothing. All he can really do is pick up blocks and throw them. Sometimes this is done to damage enemies, and other times it is to create a path from point A to point B. I had trouble balancing the timing of avoiding incoming enemies and picking up blocks, meaning I didn’t get very far, but it seems like an overall good package. You can grab Lyle in Cube Sector for free over here. 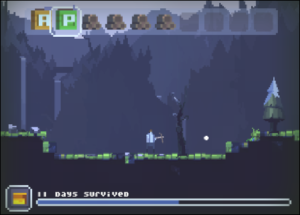 Right. In this open-ended indie survival game, you are out in the middle of the wild nowhere, tasked with staying alive. You’ll need to eat, create shelter, find fire and essential tools, and so on. A bit like Minecraft, but the controls are kind of iffy. I ended up surviving for around 15 days or so, but gave up playing when I reached a part where you have to cross a body of water on floating crates, and the physics of everything coupled with the janky jumping proved too much. Without exploring, you just end up spending a lot of time standing around, waiting for something to happen. Most often, nothing does. 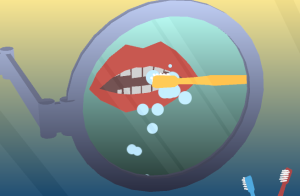 More like an interactive music video, Pale Machine is kooky and crazy and completely worth the five or so minutes to go through it. You’ll do ordinary things, like brush your teeth, but also rock potted plants back and forth and stick your tongue out very far to cause some cereal-based chaos. The song is peppy and bounces around from mini scene to mini scene, which means you’re not doing any one specific action for too long. In fact, I played through Pale Machine a second time while writing this little blurb up, and it’s still a bunch of uninhibited fun.

Terry Cavanagh strikes again! Maverick Bird is a fan game for the much-talked about Flappy Bird, and though I can’t say much about the game that this draws inspiration from–remember, I have a Windows 8 phone–the concept is simple, but so very addicting. In Maverick Bird, you are…well, a diamond-shaped being, and you can fly up using the up arrow and dive down with the down arrow. You never stop moving, and so the goal is to see how far you get without hitting any walls or traps. It’s tough, but I like it, though I turned the music off right away. Despite the screenshot above, my highest score so far has actually been…17. Take that!

Monaco – What’s Yours is Mine

Yup, I bought the newest Humble Bundle, and got a handful of new indie games to play. So far, while I’ve installed all of them, I’ve only loaded up one, and that’s Monaco – What’s Yours is Mine, a strange title for a stealthy game about…well, cooperative stealth? I really don’t know. There’s some light story setup in the beginning about breaking a fella called The Mole out of prison, but that’s all I recall at this point. I like the aesthetics very much in this and the retro-ish graphics, though it’ll take me some time to get used to the lack of vision and fog of war. Lockpicking feels good, having you press against a door or computer for a short period of time to pick it. Rubbing ain’t picking.

I was drinking a hot toddy and getting buzzed and thought this would be funny–not fun–to experience a little on the tipsy side. Turns out, I was right. Maybe. Hmm, maybe not. I had no idea what I experienced. I was a spaceship, and I shot bullets, and a blizzard of colorful lights and objects filled the screen, and there was some crazy music bumping in the background, and I did this for a little bit until I cleared the first section of levels. Most likely never going back. 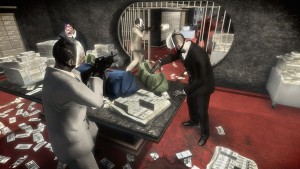 Hmm…this game is described as so:  an action-packed, four-player co-op shooter that has players donning the masks of the original PayDay crew–Dallas, Hoxton, Wolf, and Chains–as they descend on Washington D.C. for an epic crime spree. That may all be very true, but I still can’t get past the first mission, and if one can’t successfully pull off a jewelry heist, well…maybe a life of crime is not the right path to walk. My problem is someone in the store notices what’s going on too quickly, and I don’t yet know how to corral everyone away from the bank-opening action without alerting them or the cops.

One response to “The Half-hour Hitbox: February 2014”