Dead Rising 2 should not have returned from the grave 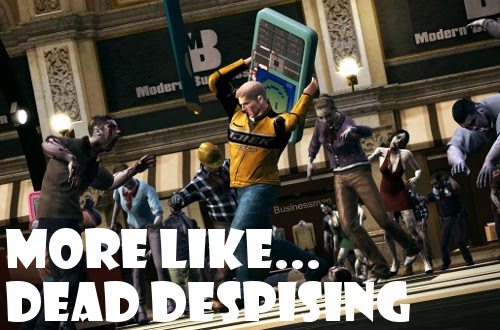 There are some games I loathe from the very beginning, but a terrible, masochistic part of my brain keeps me playing, as I have to see them through to the end, hopeful that there is maybe still some aspect or single element I haven’t seen yet that can be called enjoyable or mildly so and see the whole experience retrofitted just a wee bit. Here, let me name a few: Shin Megami Tensei: Devil Summoner Overclocked, Mafia II, and Game of Thrones: The Game. They all have their problems, but I kept playing them save for Cyanide’s take on Westeros, blind with false hope. Well, I think we can also now officially add Dead Rising 2 to this selective category.

In Dead Rising 2, you play as Chuck Greene, a former motocross champion now housing it up in the fictional casino town of Fortune City, Nevada. He is an active member of Terror Is Reality, a controversial game show where contestants kill zombies for money and fame. Chuck only does this because he needs the prize money to buy Zombrex, which is a daily medication that magically suppresses the zombification process, for his bitten daughter Katey. However, while backstage after the show, Terror Is Reality’s supply of disposable zombies is released, creating havoc and panic and bringing everything good to a shambling halt. Chuck is able to rescue his daughter and reach an emergency shelter, but has to keep her supplied with Zombrex until the military arrives in three days.

That’s the story setup, and from there you can explore Fortune City at, more or less, your leisure. So long as you don’t suffer too many zombie bites, of course. Main missions and side missions are constantly available, but some won’t begin until a specific time and others only last so long before you lose out on whatever prize they offer. Basically, you have to choose what you can do in the time that you have, and I found myself, after restarting the story twice due to boss fight difficulties, skipping all the side missions and just grinding out PP from zombies near the safehouse until a main story mission began. By the end of the game, I had only killed five Psychopaths and rescued 12 survivors, which is just a drop in the bucket for both of those optional endeavors. I only fought a Psychopath or saved someone if the description mentioned Zombrex. When not killing zombies, you can also look around for items to make combo weapons and mixed drinks to further help you kill zombies later, which is both fun and frustrating, especially when some items are terribly huge and have to be carried all the way back to a maintenance room, which is across a sea of biters. I stuck with a few staples over the course of the game, namely spiked baseball bat, the Defiler, and whatever it is called when you mix MMA gloves and a box of nails.

Other than smacking a zombie in the face with a spiked baseball bat or running over a horde of them with a mobile trash bin, I did not enjoy much of anything that Dead Rising 2 had to offer. Chuck purposely moves slow and clunky, especially if you try to jump and then keep moving. His speed increases and additional melee moves are unlocked as you level up, but it’s a slow and seemingly random process, as by level 26 I still was missing a lot of abilities that would have made running around more convenient and a bit easier. You can only save at bathrooms, which are not surprisingly everywhere you turn, so I found myself constantly losing a lot of progress if Chuck accidentally bought the farm. Can’t set waypoints on the map. Weapons break after some time, and I understand why that has to be, but man do I not enjoy it, especially after it took so long to find the right pieces and construct it. Wearing goofy clothes is okay and thankfully completely cosmetic, and I do appreciate that Chuck has them still on in all cutscenes, but Dead Rising 2 is a very goofy game with batshit crazy side quests and zany survivor-saving missions, but then also a main storyline that really does want to be taken dead serious, with its twists and turns and real-life drama of a child potentially being turned into a monster and a man being wrongly framed. It’s all very conflicting.

That previously mentioned masochistic part of my brain wants to load up my last Dead Rising 2 save, which is right before what I thought was the final boss fight, and see if I can get the other ending, but I know it won’t enhance my experience any more. Hmm. In fact, after reading a bit about it, seems like quite a bother, and for what, a silly Achievement. Meh, no thanks. However, I’m pretty close to crossing the 5,000 mark for killed zombies, so maybe I’ll put on a favorite podcast and go out swinging.