Josef the robot’s journey to stop the Black Cap Brotherhood 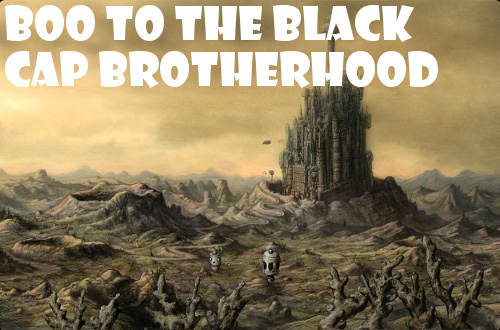 In a perfect world, I would’ve continued playing Machinarium on the PC and without a walkthrough minimized on my laptop, hidden but always there at the ready. However, the deed is done, and I finally played through Amanita Design’s gorgeous automaton-themed point-and-click adventure game on the PS3, using a visual (and sometimes video) guide at nearly every step. This makes me hesitate to say that I “beat” it, but I guess I did, as I saw all there was to see, including the credits, and managed to solve a puzzle or two all on my own though I know in my heart of hearts that I never would have escaped the titular city without outside assistance.

Machinarium starts with our little robot Josef disassembled and tossed aside outside the city. As he puts himself together and makes his way back to mechanical civilization, a plot appears: the Black Cap Brotherhood is up to no good, bullying many and keeping Josef’s girl kidnapped in a small kitchen, as well as planting a bomb somewhere else in the city. At least that’s what I’ve put together based on playing the whole game all the way through, as well as some secondary sources to fill in the gaps. Since the game lacks any kind of straightforward narration, both in text and voice, it’s a lot of guessing what’s going on, though the single screen plot problems are generally very obvious.

To progress, you point and click. Except I’m playing Machinarium on the PlayStation 3, so instead you move a cursor with the analog stick and press a button. However, the end results are still the same. Unlike many other adventure games, you can’t just swoop the cursor across a screen to see where all the interactive items are and click until all have been grabbed; everything is relative to Josef, and items only light up if he is next to it and the right height. See, Josef can stretch up to be taller or squat down to be smaller, and finding certain items or solutions is often dependent on his size. I really like this, as it adds a certain realism to a game stark with sci-fi and steampunk, but it also makes for very challenging, sometimes frustrating gameplay. To learn that you were on the right track with a puzzle solution, but because Josef was standing a foot to the left was unable to see your idea come to fruition is a big bummer.

I appreciate the commitment by Amanita Design to a voiceless world, which shows in the hint and in-game walkthrough systems. If you select “hint,” Josef will use a think-bubble animation to show a clue for one of the puzzles on the screen, though the clue itself is not always clear and direct. For the “in-game walkthrough,” you have to play a mini-game wherein you control a key and shoot spiders in your way towards a keyhole; once beaten, you open up a book to an illustrated walkthrough that, again, is not always clear and direct, and because I’m playing on the PS3 and not sitting directly in front of my monitor, it can be hard to see what is what and what is where. The zoom function is nice, but it doesn’t zoom in far enough, if you ask me and my bad eyes.

I found most of the item-based puzzles to be relatively straightforward, if a bit tricky if you didn’t spot that one item you needed hidden in the corner of the room. However, the logic puzzles to open doors, locks, elevators, projectors, etc were beyond stumping. Took me back to my high school math class days, where I’d sit staring at a piece of graph paper, no idea how to even begin. Many broke my brain and detracted from the experience because as soon as I saw a panel of switches or knobs or lights and wires, I went right to the Internet to watch somebody else do it for me.

That grudgingly said, this game is worth seeing. Yes, yes, yes it is. Whether you have to pound your head against a wall until the solutions ooze out your ears, “cheat” and play the key mini-game to unlock the illustrated walkthrough provided by Amanita Design, or simply use an outside walkthrough that clearly says “use object A with object F to see the robot do a Hadoken.” However you need to go about it–go about it. Machinarium‘s visuals are a pure delight to take in; hand-drawn visuals mixed with fun, Pixar-like robot designs, and a soft, rusty color scheme really help sell the world as a cohesive state. There’s always stuff in the foreground and background to observe, and I love how rooms would just appear if you poked Josef’s head through a window or hole, materializing right before your eyes. If you can, let Josef go idle, and you’ll get to take a glimpse into some of his happier memories.

I guess now I just have to wait for Samorost 3 to come out. Hopefully the puzzle-solving areas of my brain have recovered by then…

Josef the robot
Out to stop a bomb, only
If it’s in his reach