Pretty late to the Joker’s party in Batman: Arkham Asylum 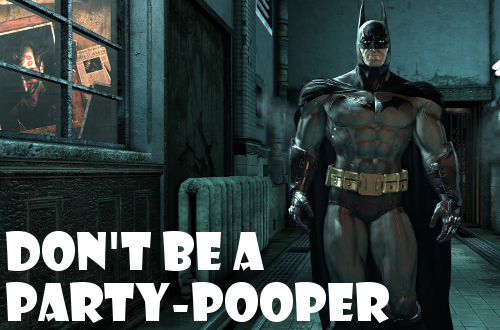 Batman: Arkham Asylum came out in 2009 to nearly unanimous praise, and four years later, during a PSN summer sale, after consecutively not experiencing Rocksteady Studios’ take on the Dark Knight year after year after year after year, I bought it for a silky smooth $5.00. And then a couple months later, simply because everyone was getting back to praising the place where it all began after seeing how lackluster Batman: Arkham Origins turned out to be, I installed the game, booted it up, and saw the errors of my ways over these past few years. It’s more or less Deus Ex: The Bats Revolution.

First things first, the story setup: in Arkham Asylum, the Joker instigates an elaborate plot to seize control of Arkham Asylum and trap Batman inside with many of his incarcerated foes. Subsequently, the Joker also holds the power to detonate hidden bombs he placed around Gotham City before getting himself captured. Batman must now fight his way through the asylum’s loose inmates, save some named people, and put an end to the Joker’s plans. He’ll do this by playing detective, being sneaky, hanging from gargoyles, and punching rhythmically when the scenario says so.

Before I get into my impressions, here’s a bunch of silly comics about Bats from my recently completed 365 BAD COMICS project:

Right. Couldn’t resist the chance to shamelessly plug my art.

Anyways, I’m having a lot of fun in Arkham Asylum, and I’m only at a 14% completion rate. This is even more surprising when you realize that, as a superhero comic book character, I don’t find Batman very interesting. Definitely more so than Superman, but that’s it. Everybody else comes ahead. I’m more of an X-Men follower, but Bruce Wayne is kind of just a rich man in a costume beating up poor criminals with fancy gadgets and a throaty voice. I’m sure I just made a lot of people angry with that statement. However, all his toys do make for fantastic gameplay, which is what this game delivers on tenfold.

Batman is trapped in Arkham Asylum, which is actually called the Elizabeth Arkham Asylum for the Criminally Insane and found isolated just outside Gotham City. Has hints of Alcatraz prison. You’ll come across good guys and bad guys as you move from building to building, all while the Joker teases you from afar, promising a party you’ll never forget. It’s a mix of open-world-like areas and more linear hallways and rooms, and I think it works great. You can explore a bit and find interview audio logs and Riddler trophies or you can stick to the pretty obvious path to see the story unfold at a healthy clip. I’ve done a little bit of both, but I think I’ll just keep pushing the story forward from now on, even though those Riddler trophies sure are dang tempting and do at least reward Batman with a pinch of XP. And you need XP to unlock gadgets, combat moves, and armor upgrades.

Combat requires rhythm and reminds me of what the Assassin’s Creed series has been doing as of late, with countering attacks simply keeping the flow going so you can chain together attack after attack for bonus XP. Personally, I’ve tried getting through most scenarios as a silent pounder, loving the inverted takedowns from gargoyles. But unfortunately, you can’t play the game the whole way in that fashion, especially when boss fights pop up. Detective Mode really helps, which makes enemies appear as visible skeletal frames on the map, so you know exactly where everyone is. Reminds me warmly of the good times in Deus Ex: Human Revolution–see: not the boss fights–of sneaking through vents and using the augmentation that lets you look through walls for enemies.

So call me surprised. Call me stupid. I wish I had started playing Arkham Asylum a long time ago, but I’m pretty okay with seeing it now and enjoying a slower pace through the halls of this creepy psychiatric hospital. I might be late as frak to the party, but I’m still celebrating.

Okay, so here’s the thing. I played a bit of Deep Sleep, which I recently wrote about, and talked as I pointed and clicked. I’m tentatively calling these things “Paul Plays…” with the intention of naturally doing more. My audio is relatively low compared to the game’s audio, and it’s been an ongoing process, learning how to do this on my own. I will try tinkering with my microphone settings some more before the next go. If any of y’all have tips or suggestions, by all means–share with me. Otherwise, give it a click.

Thanks for checking it out!