Two more dead, or should I say “retired,” in Fire Emblem: Awakening 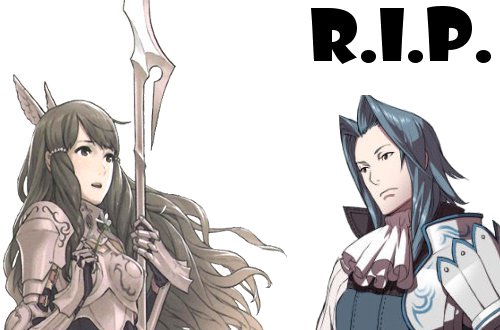 Well, last night saw me complete the Paralogue (which is a strange new “word”) and Chapter 4 in Fire Emblem: Awakening, and from those events came more losses. Keeping up with my promise to embrace permanent death and soldier on, I am sad to announce that both Virion and Sumia are dead. Well, maybe not dead-dead, as the roster in the barracks says they “retired” whereas Vaike’s profile definitely says where and when he died. Evidently, this means that these two characters are important to some plot beats and will still be involved in cutscenes, but are no longer useable as units. Either way, gone.

For Sumia, she moved too close to an enemy archer, which took her down in one hit. Think I learned my lesson there.

For Virion…well, I don’t remember exactly what it was that killed him. Might have been a critical hit from an enemy wielding a throwing hand axe. Either way, he’s done, and so my number of archer units drops from one to zero. Boo.

Oh, and I totally did not get Donnel to level up during the Paralogue, which means he went back to the farm instead of joining the Shepherds and fighting alongside Chrom and company.

So, you know, off to a stellar start. What happens if I run out of useable units? Will the game give me more as I progress, or do I need to purchase new teams from the wireless features section? I guess time will tell. I joked with Tara last night that if I get to a point where I can’t complete the next chapter because I lost too many people prior, I’ll just stop playing the game, accepting that’s how the story concluded in my mind. Or maybe I’ll just start over on Casual mode and try again in a more leisurely fashion, but for now, it’s onwards and upwards, to death and glory, but mostly to death.

7 responses to “Two more dead, or should I say “retired,” in Fire Emblem: Awakening”