Hunt the varmint that killed your family in Westerado 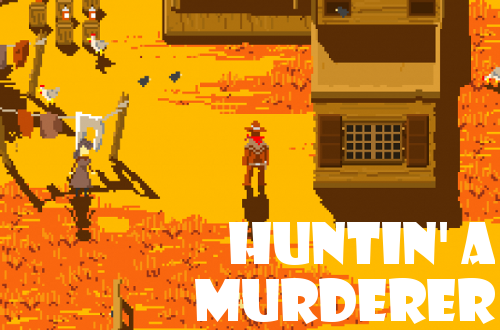 With a name like Westerado and a colorfully retro look, it didn’t take much to get me interested in this browser-based Western, free to play over at Adult Swim’s gaming subsite. A dastardly bandit kills your entire family, burning your home to the ground as a bonus, and you must go seeking revenge, gathering clues and helping others to learn the true identity of the bastard, in order to shoot him in front of the local saloon. It’s a traditional premise, but the idea of not knowing exactly who the murderer is works amazingly, especially since you can accuse nearly everyone you talk to and even draw your pistol on them. I killed a rancher just because he seemed to be holding back information; I’m not proud of that, just saying it’s something that can be done.

You control your bandit-seeking cowboy with WASD, using J to holster or unholster your pistol, K to both cock it and then fire, and R to reload a single bullet. E is your main action button for speaking and selecting dialogue options. Your cowboy wanders towns, picks up quests, learns clues, and continues on. Oh, and you can even join in a round of poker. I’ve played Westerado now in two separate sessions, with the first lasting an hour, and the second being much shorter than that, eventually breaking itself. It’s a surprisingly deep game that could potentially take several hours to complete, unless you know exactly where to go and who the bandit is from the word go. Not sure if that’s random each time or not, wasn’t paying attention to the details there.

I struggled with the shooting, mostly because there are some faults with it. I like the idea of manually reloading one bullet at a time and cocking the gun each time before firing, but maybe it’s a little too restrictive in execution. Throw in the fact that you automatically holster your pistol when you run and you can find yourself taking out your pistol, running over to an armed bandit, and then standing there empty-handed while your hat gets shot off. Lose three hats and then get shot one more time–you’re dead. Not a huge deal, as some progress is saved, though it’s not entirely clear what is being saved and when. I did die fighting some bandits and returned to the same place to find the ones I managed to kill still on the ground. So, yeah. That’s cool and all, considering it is browser-based, so you kind of have to play it in a single sitting or leave it running when you walk away.

And naturally, as this is me we’re talking about, I ran into a nasty glitch, which I worked my way around, but then it broke Westerado, thus lowering my interest to ever play again and figure out just who exactly shot my mother and brother. Oh well. I know he had a brown hat and is very thin, but that could be a number of men in town. Anyways, the glitch. Tasked with leading a caravan of goods, I quickly had to defend it from bandits with guns on horseback. Well, that’s what the instructions said, at least. No bandits ever showed up. The music was hyper and dramatic, and the caravan and my cowboy continued to race forward. This went on uneventfully for several minutes before I figured out that something broke; no matter what I did, I couldn’t get the bandits to spawn. Ultimately, I shot the caravan’s horse and lost the mission. Was dumped back into the wonderfully named town of Clintwood, where things slowed down and the game hitched up, eventually freezing on the fast travel map. Well, shoot.

So yeah, Westerado. A fantastic name, appropriate and polished tunes, a neat look, and the potential for a great mystery to solve. Alas, I don’t have the time to dig into it all at once, and now I’m scared of more glitches. But feel free to give it a chance, as it’s pretty charming otherwise.