Taking down Terramorphous the Invincible one tentacle at a time 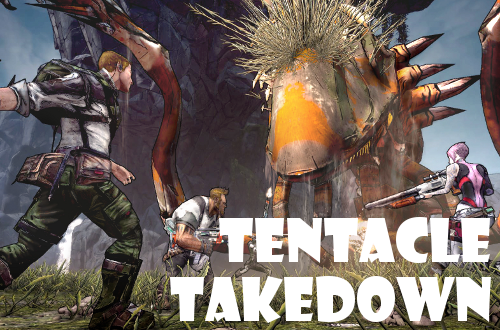 I’ve always been a little sad knowing that I’d never be able to take down Crawmerax the Invincible from the original Borderlands by myself, as well as the fact that we’re now long ahead of that game and chances are highly unlikely I’d ever get a sizable group together to raid it for the rarest weapons on Pandora. Evidently, there was a way to glitch the thing through protective terrain, but that strategy has since been nerfed or just isn’t consistently reliable. I remember trying to take him on once with my Commando and the fight not lasting very long. Also, I doubt I can ever go back to the original Borderlands now that I’ve come to appreciate the enhancements made in Borderlands 2.

That said, I’m pleased with what we (hellomightydog, Burger2862, and myself) accomplished last night, taking down Terramorphous the Invincible. No, really, we did. We worked together, fired a lot of bullets, respawned a bunch, hid behind rocks, and hooted and hollered when the big ol’ baddie fell and swooped off the cliff’s edge. Disappointing loot aside (only one Legendary dropped and nobody really wanted it), this was the real reward:

It was not easy. It took about an hour, and the most frustrating part was that we got Terramorphous down to one-fourth health, but then I ran out of ammo and had to leave my perfect hiding spot to grab some more, quickly dying at the same time everyone else did, giving Terramorphous full health in one sad gulp. So we went at it again, this time with me using a newly acquired LV 50 Infinity (never runs out of ammo); I stayed in one spot and never not held down the trigger button. At one point towards the end of the fight, my finger began going numb.

Using the rock hiding spot glitch, the fight isn’t too challenging so long as your other team members keep the beast busy and distracted, but there are a few moments where it can get real hairy. If all other team members die, Terramorphous will eventually make its way over to me and find a manner to hit me behind the rock. So, it’s important to keep shooting it. Also, shoot the tentacles, but try to leave a few with very little help for Second Winds. And be prepared to fight off a few miscellaneous tentacles after you take Terramorphous down; we were checking out the lame loot when, out of nowhere, a couple tentacles began damaging us. As if.

Other than that, yeeeeah. We did it. One raid boss in the bag. Maybe Hyperius the Invincible is up next? Ha. Maybe…