Mario, Princess Peach, and Bowser are back at it in Super Mario 3D Land 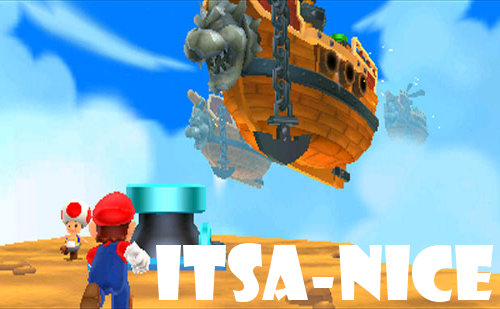 We’re closing in on the one-year anniversary of the Nintendo 3DS launching in the United States, and I’m now ready to talk about the third retail game I’ve purchased for the handheld. Yes, I said third. One entire year has almost gone by, and I’ve only bought three physical games made specifically for it. If I was an esteemed mathematician with framed diplomas on my walls, I’d venture a guess that that’s not a good ratio.

The first 3DS game I got was Pilotwings Resort, and it was an impulse buy as I wanted something–nay, anything–to have for my new system to show it off to folks. The second 3DS game I bought was Shin Megami Tensei: Devil Summoner Overclocked, and that was another impulse buy as it was right during Hurricane Irene and I wanted something new to keep me entertain while Tara and I went without power for as long as the handheld’s battery life held out.  The third 3DS game I got was Super Mario 3D Land, and I picked this up shortly before leaving for MegaCon as, again, I wanted something new to have with me on the road in case the hotel proved boring or I needed a distraction or whatever.

Hands down, between the three, Super Mario 3D Land outshines them all. It’s colorful and bouncy and filled with great nods to the past and neat uses of the system’s 3D gimmick. It starts out pretty slow and tame, but the difficulty ramps up with chasing ghosts and odd camera angles and my lack of skill with the circle pad for controlling our favorite plumber. I’ve gotten up to World 5 at this point, but need to collect a few more star coins before I can take on the boss level. Which is fine, as I definitely rushed through some earlier levels and can now go back to sniff out those shiny gold carrots on strings.

I’ve only ever played Super Mario 64 via an emulator on my computer and not for very long at that, and–to many disappointed gaming faces, I’m sure–I’ve never played Super Mario Galaxy or Super Mario Galaxy 2. Not a single second, and no, I’m not going to wait for you to pick up your jaw off the floor. I say this to stress the point that I don’t have a ton of experience in controlling Mario in a 3D environment. I am more use to running him from left to right, and it shows. I am constantly trying to run him in a straight line, which leads to problems like missing jumps or hitting enemies. It’s a learning curve for me, really.

And that’s fine. I’m in no rush. As with my 3DS Ambassador copy of Yoshi’s Island: Super Mario Advance 3, I like taking my level-based platformers slow. I do a level or two and call it a night. Supposedly, once you beat all eight worlds in Super Mario 3D Land, another eight appear. Oh man. That’s a lot of flagpoles to jump on. At least this retail game is providing enough meat for a $40.00 price tag, whereas Pilotwings Resort certainly did not and Shin Megami Tensei: Devil Summoner Overclocked probably does, but I’ve yet to get very far into the game due to my negligible SRPG skills. I really am looking forward to playing more.