Achievements of the Week – The Be Gone All Fresh Meat Edition 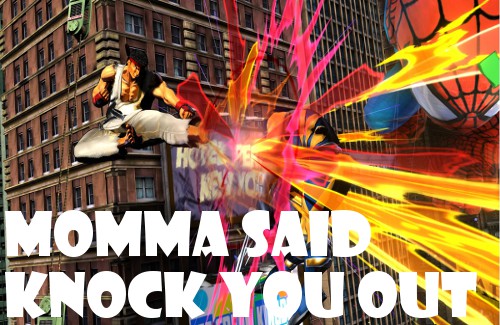 Y’know, I just don’t have any witty or elaborate intro to this week’s edition of Achievements of the Week. I played a few games on the ol’ Xbox 360 when the living room wasn’t terribly frigid, like Saints Row: The Third and more Fallout: New Vegas after too long of a hiatus, but nothing popped in those titles despite my hardest efforts. So yeah, normally, I’d pick a bunch of my favorites to show off, but I only unlocked three Achievements over the last seven days and so I have to dub these as the best of the bunch for no other reason then them being all that’s there.

I already wrote about how I cheesed my way to earning these nuggets earlier this week. Mmm cheese.

Instead of using your filled up super bar thingy to unleash a flashy special attack, you can spend it completely to knock a character from your opponent’s team off the screen and out of the match for a short time. I think I did this each time by accident as MVC3 is a button-mashing game for me. Be gone, Deadpool! You are annoying!

That’s it. My one goal for this week is to earn the Curios and Relics Achievement in Fallout: New Vegas, but my problem is actually finding a unique Mojave Wasteland weapon that I like to use. Rhaegar has no points put into melee or Energy weapons. I’ve been rocking That Gun for awhile now, but have no idea if I’m even close to the 10,000 damage threshold. Wish there was a way to check, but I’ll just keep soldering on down the path of Mr. House and see if it’ll just pop on its own.

What about y’all? Any goals during the slowest month of new releases ever? Tell me about them in glorious details below in the comments.

This entry was posted in achievements, achievements of the week, entertainment, RPGs, videogames, xbox 360 and tagged Fallout: New Vegas, Marvel VS Capcom 3, Rage, That Gun. Bookmark the permalink.