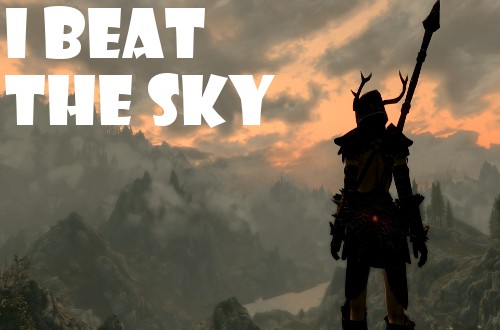 Don’t panic, dear readers. Yes, it is still 2012, the year of our unmaking. We did not travel back in time by nine days and some change. Instead, since I’m slow and sometimes lazy and not the best of planners, I did not get to write about all the games I completed in 2011 in 2011. So there’s some carryover. No big deal, really. I just need to type up some words on The Elder Scrolls V: Skyrim, Professor Layton and the Last Specter, and Half-Life 2: Episode One before moving on to a brand new list for a brand new year, which, I might add, already has an entry. That said, expect me to bang out these three final posts for my Games Completed in 2011 list this week.

Right. Completing The Elder Scrolls V: Skyrim seems like an odd thing to say, as I both have done it and have not. I have finished the main story questline, killing dragons and dragon supporters and dragon masters and all that. I have made my way to the top of the power heap in both the Mages Guild and Thieves Guild. I have raised a skill to 100 and bought a house in Whiterun and earned a bit of gold and did some errands for Daedric gods and goddesses. My save slot says I’ve played for around 75 hours or so, and there’s still more for my character Lohgahn to do.

It’s kind of crazy to consider that after such a long amount of playing, I’ve not even touched any of the civil war story stuff. Not a single thing. I kind of feel like my Imperial will side with the Stormcloaks since he’s none too pleased with almost being put to death by, uh, his Imperial brethren, but later on, during the main storyline, I kind of slighted Ulfric , and now it seems odd to pick either/or. I guess I wish that the civil war missions were interspersed into the main story stuff to make it seem more important, but given how optional it is, I dunno. Maybe it’d be better to save that stuff for a new character, as I do want to try a non-stealth route to get a better feel for the combat or deadly use of magic.

Despite being full of bugs and glitches–some more annoying than others–the realm of Skyrim is deeply impressive. It’s not all just snow and mountains and snowy mountains, which is appreciated, and the designs of dungeons, caves, and ancient ruins are ten times better than in Oblivion, making them fun to explore. Toss in the addition of shortcuts for exiting said dungeons, caves, and ancient ruins as an extra bonus, and you’ve got some great design work here. At this point, I haven’t even fully explored all the major towns yet, as well as not even hitting 100 locations discovered. There’s so much life in Skyrim that one might honestly not ever see it all.

Not all is perfect in Bethesda’s newest mammoth. The dragon fights can be pretty lame thanks to kiting or horses joining in or the dragons themselves glitching into a rock. Conversations, while not as stiff as previous games, are still pretty robotic. The menus are easier to navigate, but I wish there was a better way to see what your character looks like with all your glass armor and enchanted weapons.

I haven’t touched The Elder Scrolls V: Skyrim in a couple weeks now, but I suspect I’ll hop back in soon enough to do some more quests and maybe whittle away at my ever-growing miscellaneous objectives list. Or just start over with another character. But not until I get at least 100,000 gold in my pockets.