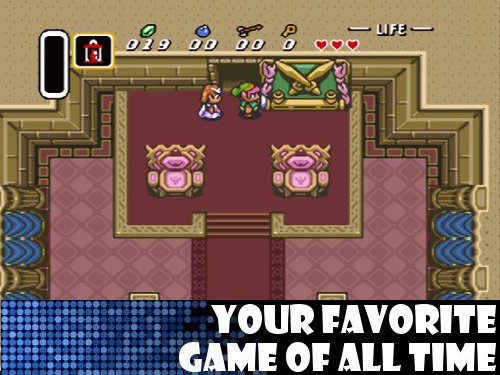 Well, this has been a long-time coming, but here we are, the final topic. “Of what?” you ask, looking around with wide eyes, a dribble of drool leaking down your chin. Clearly you’ve forgotten. That 30 Days of Gaming meme that I started back in…oh gawd, March 2011. With the new year swinging on in, we’re almost at the 365 days mark for a meme meant to be completed in thirty days. Thirty topics for thirty days. Don’t label me a slacker just yet as I was totally honest about this meme in that it was going to be a slow crawl, a thing I went to here and there to fill in the gaps when all I could find inside my cranium were dustbowls and old photograph albums. In truth, the final few topics have been pretty tough to nail down, and I’ve been less interested in thinking about them discerningly.

And the final topic is the topic, the one that puts it all out there. The kicker: name your favorite game of all time. OF ALL TIME.

Right. It’s actually quite easy to name my favorite videogame of all time. That’d be The Legend of Zelda: A Link to the Past. I mean, the image on Grinding Down since its very birth has been the Master Sword in all its forest-hidden glory. Should’ve seen it coming, people. The hard part comes with writing about it, as it’s a game so close to my shaping, a game so perfect in memory and nostalgia that I am scared if it’s even possible to express so with an ounce of success. Guess I’ll give it a shot. Maybe even a hook shot.

I don’t remember how A Link to the Past ended up in my SNES collection. I don’t remember saving up money as a kid from mowing the lawn or washing neighbors’ cars or my allowance in general to pay for it. I don’t remember trading with friends or borrowing it from a friend and then just keeping it like a horrible goblin. I don’t remember getting it as an older boy, a teenager, or a man, meaning it had to come into my hands around the time it came into many others’ hands, near its launch date of late 1992. I don’t remember how I got it, but I’ve had it ever since, as it’s one of the few SNES carts that did not get traded in when I was young and dumb. I do, however, remember playing it. And playing it again and again.

For those that don’t know, A Link to the Past is a coming-of-age tale where a young Link has to save a princess and defeat Agahnim not once, but twice and then slice Ganon apart for peace to return to the land of Hyrule. To do this, he has to travel between a Light and Dark World to collect the Master Sword and three mystical pendants, as well as uncover the Seven Sages. In between all that, you’ll explore villages and dungeons and rivers and forests for items and people to help you along the way.

There was a time when the Internet didn’t spoil videogames for everyone, and during that time I played A Link to the Past. I found my way into the castle during a rainstorm via a hole in the ground without anyone pointing it out to me. I attacked chickens until they attacked me without knowing that would happen. I made it through the Ice Palace dungeon without a walkthrough. I totally cried in frustration when I couldn’t figure out how to beat Moldorm, and it knocked Link off the screen for the umpteenth time. I helped the lost old man on Death Mountain without knowing whether it was a trick or not. I revealed a monster with sunlight, I blew apart cracks in walls, I dashed into a tree to unleash a swarm of bees…I…I…

This is a videogame stuffed to the brim of little moments, tiny secrets, and gleeful nods. And that’s a big part of why it’s so special to me. The “main quest” of stopping the evil overlord is by the books, but it’s all the little moments that make the adventure so spectacular. And the music. And the fact that there’s an entire second world to explore, which comes seemingly out of nowhere, and you can flip to and from it with ease, on the fly, giving you freedom to explore and try things out. And the graphics, the kind that are ever-lasting, the kind that evoke warm feelings upon seeing them today, tomorrow, and years down the road.

I love it immensely, though the last time I sat down to play it on my still working SNES was many moons ago. Maybe even in the early 2000s. I’m probably overdue for a trip down memory lane with a game that has still not been reproduced today. There is nothing else like it, not even other games from The Legend of Zelda. Though the DS ones come close in spirit.

So there ya go. My favorite videogame of all time. A Link to the Past. I probably didn’t do it enough justice, but whatever. This isn’t a college thesis here. Agree or disagree or move on silently to something else on the Internet. We’re done. Though there’ll be a roundup post on the 30 Days of Gaming meme soon, too. Until the next meme, I guess!

Tagged A Link to the Past, Link, The Legend of Zelda, Zelda

Yoshi’s Island and the tears it cries 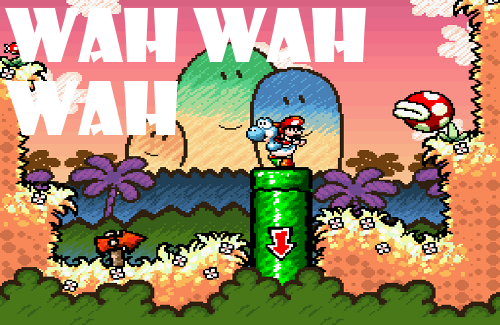 Thanks to hanging out with my awesome niece and nephew, Uncle Pauly’s heard babies at their best, when excited for Cheerios or a new toy or that dangerously catchy tune from Thomas the Tank Engine, as well as at their worst, when the world is just crumbling apart and they have to go to bed instead of staying up with us cool adults who then get to have crazy, neck-and-neck games of Madden ’12 in the dark. Naturally, babies sound better when being amazed and amazing, laughing and playing in their own fantastic universe, not screaming for salvation.

Yoshi’s Island–well, Super Mario World 2: Yoshi’s Island if you want to be official with titles and all that–gets this, and that’s why Baby Mario screeches the moment he leaves Yoshi’s back. He doesn’t just cry, he bawls for home. He makes a sound that is unrelenting and uniform in its purpose, to stop all further plans save for the one that gets him back to his dino buddy. It’s excruciating in how effective it is though.

As you can tell, I’m working my way through Yoshi’s Island, level by level, tear by tear, and it’s a great time except when Baby Mario starts howling. Strangely, amazingly, I’ve never played this game with an actual controller. I missed out on it during its SNES heyday only to emulate it poorly on a computer with keyboard controls during my one of my four years in college and to now get it in late 2011 on my Nintendo 3DS for being a good ol’ supporter of expensive handheld consoles. There are some downsides to this, as despite how colorful the above screenshot is, the version on the 3DS gets stretched to fit an unfitting screen and thus loses a lot of pretty, becoming muted and occasionally muddy. But otherwise, the platforming remains solid and challenging, with enough variety to keep each level sempervirent; I believe y’all know that if you want to get dizzy, touch fuzzy.

I know the levels from the first two worlds extremely well, as that’s as far as I ever got thanks to the previously mentioned keyboard controls. Currently, I’m on World Two, at the final castle, and am looking forward to moving on to the next world for all things unknown. Many of the game’s tricks still work well today, especially the third dimensional stuff, even when on a system that loves that stuff and yet can’t make it more effective because it’s only a port of a GBA title and not something made specifically for the 3DS. Kind of a shame there. Let’s keep the crying down to a minimum. Especially you, Baby Mario. Especially you.