Back to blogging and videogame snogging 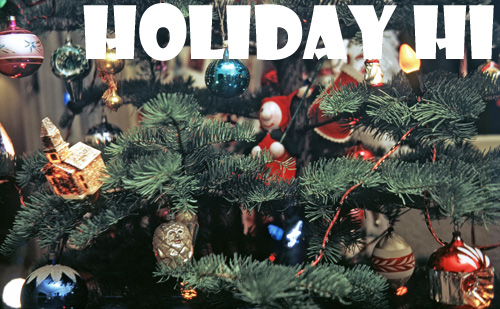 I did not plan to take two weeks off from blogging about videogames and giving Grinding Down love five days a week. Not one bit.

See, first things first, I was in a car accident. I was coming home from a work-hosted Christmas party, thinking about what gifts I still needed to buy for various family members when, without warning, a car slammed into my vehicle from behind at such a force that I screamed a sound I never knew existed within my being and bounced forward down the highway. I was doing around 65 mph; this person, who, with not much else to go on, I believe was drunk, had to be doing around 80 or 85 mph. They then drove off, leaving me on the side of Route 80, scared and uncertain. So I had to spend a few days dealing with that, as I was actually in a rental car at the time of impact and had to go to a police station, get an accident report, pick up my true car Bullet, and so on, so on, so on.

Then came the holidays themselves. This is the year I learned that, well, I’m not going to love the holidays as much after losing my mother to cancer last December. Makes sense, really, and so my depression surfaced to a magically new high. I played a lot of videogames, as I’m wont to do when down in that ditch, but I couldn’t get myself to write about them. I just hid in them and used them for quick hugs and abused them for ways to avoid all things real, all things scary. But I’m back now. I think. Yeah, hopefully. Gotta make the best out of this manic phase before I swing back low, right?

So, the year of 2011 has come and gone, and it’s that time for those Game of the Year roundups. I offered my picks over at The First Hour, naming…L.A. Noire as my Game of the Year! Yeah, woo. Play that game, y’all, if you haven’t yet. I also call out Bastion, Fallout: New Vegas, and Monster Tale as pretty great experiences, which should be obvious to anyone that follows this little blog here. I write about those games lots. Go check it out, even if Greg still doesn’t love exploring the Mojave Wasteland.

Throughout all this quiet time, I’ve played many, many games. Seriously, dear readers. A ton of ’em. Here’s just a few to whet your collective whistles: Ratchet & Clank: Size Matters, Saints Row: The Third, Rage, X-Men Legends II: Rise of Apocalypse, Kirby’s Epic Yarn, Pushmo, and Super Mario World 2: Yoshi’s Island. Again, to name a few. There’s more. And I have a lot of blog posts bouncing around my rabbity head, so stay tuned. Cause I’m back at this. I hope.

One response to “Back to blogging and videogame snogging”