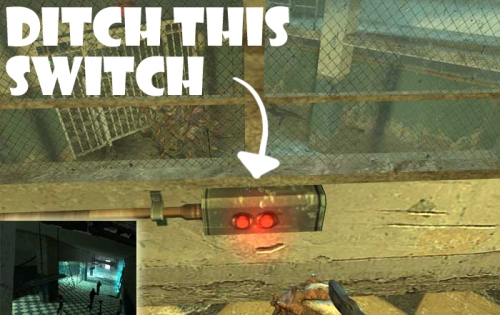 I keep running into these horrible glitches, but this one’s the worst. Mostly because I can’t seem to find a way around it save for starting Half-Life 2 over entirely, something I’m not interested in at all. Especially considering how long it took me to get to the Nova Prospekt level, which I’d estimate is about three-fourths of the way through it all. Let me explain the problem though.

In the Nova Prospekt level, Gordon Freeman has a bunch of antlions on his side, which make fighting off armed soldiers a lot easier. You just toss this weird, alien ball at a group of them, and the antlions pounce like it’s feeding time. Well, for them, I guess it really is. We’re indoors, at what looks like a security prison of sorts. You eventually stumble across an alien that was tortured to death, and a switch upstairs that opens the main gate, which I assume leads to the level’s exit. I assume because I don’t know. The switch won’t switch on. It just stays red. When it’s on, it should turn green and open some doors. But it does nothing. I even tried throwing a computer keyboard at it.

The worst is that the game autosaves a millisecond before approaching the switch. And unlike Fallout: New Vegas and Elder Scrolls V: Skyrim, I do not make a thousand and seven saves. I figured my journey through a linear shooter wouldn’t need it. So, I have a hard save from the beginning of Nova Prospekt and an autosave moments before the switch is to be flipped; reloading neither worked. The switch will not turn on, and after looking around online, I found some other Half-Life 2 players frustrated with the same problem. Sigh…

So, I did something I hate to do: I skipped ahead. Without knowing how Half-Life 2 concludes, I quit to the main menu and started up Half-Life 2: Episode One, and boy was I confused. I guess, in some manner, I know how the previous game ends, but the opening cutscene with the aliens, um, making sexual gestures with Alyx was particularly disturbing. Also, looks like the world has gone to rubble. And dark clouds. And crazy electric storms. Gordon and Alyx, now armed with some vital computer data, have to make it out alive. Episode One plays just like Half-Life 2, but–to my happy surprise–is much more focused and direct, with little room to get lost. Just runnin’ and gunnin’, with no more driving sequences (so far).

Popped a couple of Achievements that I liked, too:

Watch Your Head! (5G): Make it to the bottom of the Citadel’s main elevator shaft in one piece.

I think this came up shortly after Alyx’s Zombine joke, which was adorable.

Attica! (5G): Destroy the gunship in the hospital attic.

There’s more, but I’ll save ’em for the next edition of Achievements of the Week. Looks like I’m actually on the last level of Episode One, trying to safely get some citizens on a train, which is a little shocking, seeing as I’ve only logged about three hours of gameplay, but probably a good thing. Small chunks of Half-Life 2 are okay with me, especially when I can get through them sans glitches. Think I’ll move on to Episode Two next, and then spend some time reading the Internet on what I missed at the end of Half-Life 2. Because I’m not going back and playing that thing over again; you couldn’t pay me money to drive that horrible airboat or take down that hunter-chopper again. Well, wait. That depends, I guess. It’d have to be a lot of money. Throw down your best offer. 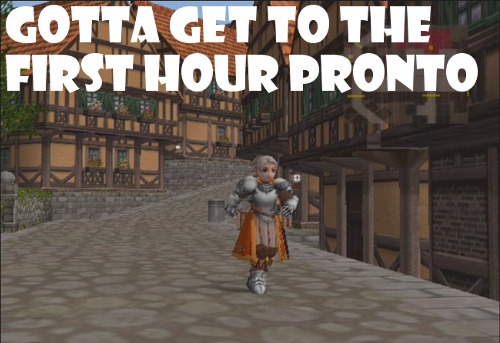 Hey, remember when I drank a bunch of Felix Felicis and found a copy of Suikoden III recently? And then remember when I told the world how scared I was to even play it? Well, I finally did it. Play, that is. For sixty minutes and then some. Even took notes. You can read all about discolored used game discs, getting lost in the smallest village ever, and duck soldiers over at The First Hour.

I’ve played past Suikoden III‘s first hour, too. Thanks to Sergeant Joe, Hugo was able to schedule a meeting with the people doing business in Vinay del Zexay’s council building, but we have to wait at least a day; until then, the capital is ours for the exploring, and it’s a pretty big place, with lots of shops and citizens to speak with. Alas, Hugo’s not rich, so there’s not much to do. I’m guessing at some point I’ll sleep at an inn and go back for that meeting. At some point…

But yeah. Again, please check out my coverage of Suikoden III‘s first hour from Hugo’s chapters.