LEGO Harry Potter, Years 5-7 is fun, but more of the same 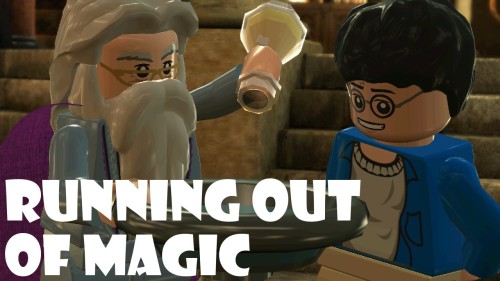 LEGO Harry Potter, Years 5-7 came out on 11/11/11, but despite that, GameStop wasn’t handing out copies until a few days later, which was a little annoying and makes me want to never pre-order with them again. This is the second time in a matter of weeks where they did not respect a game’s release date–Professor Layton and the Last Specter, yo–while every other place in existence did. So I had to wait, though the waiting wasn’t terrible as I had The Elder Scrolls V: Skyrim to eat up my hours. I swung by GameStop after work earlier this week, got my copy, got my pre-order bonus of a Dumbledore’s Army t-shirt which I’ve passed on to my wife, and snagged two more cheap PlayStation 2 games (Tom Clancy’s Splinter Cell and Legacy of Kain: Defiance, if you’re curious). Tara and I finally found some time last night and gave the game a go.

So far, it’s LEGO Harry Potter, Years 1-4 with the years changed in the title. That might seem like a harsh comment, but it’s not. It’s warranted. We’re literally exploring the exact same rooms in Hogwarts that we explored in the first game, destroying the same items, hitting the same chairs/desks with spells, and completing the same challenges, such as turning on all the torches for a gold brick. I already spent many, many hours doing this to get a bajillion studs and buy everything and complete the game to 100%, and it’s clear now that if we had all just waited for a product called LEGO Harry Potter, Years 1-7 to come out, it’d be everything and above. A shame this got separated in two beings (much like the final film). The developers even then had to come up with some way to make Harry and his friends lose all their hard-earned progress, just like Samus in Super Metroid went from hero to zero; Umbridge puts a ban out on several spells, taking them out of the selectable spells list. Why couldn’t the game read my save file from LEGO Harry Potter, Years 1-4 and decide that I’m devoted enough to let me keep everything I already learned? I’m looking forward to moving past the school stuff and on to newer, stranger territory in Harry’s seventh year. Seems like Grimmauld Place–not where Tara and I live, but the actual House of Black–will be the second game’s new hub.

Unlocked two Achievements out of 49, with the first’s name being maybe the best name for a Harry Potter-themed Achievement thus far since Solid Snape:

A review of the game’s first sixty minutes, with some funny comments from Tara, is forthcoming over at The First Hour. Will obviously let y’all know when it goes live. And whether or not the magic seeps back on in…