Monster Rancher EVO is for circus freaks only

I’ve never been to an actual circus before; all I know about circus life comes from secondary materials, such as the fantastic Mechanique: A Tale of the Circus Tresaulti by Genevieve Valentine or those few hours I spent wandering around the Circus Circus Las Vegas when I was 17 and on vacation with my family. In my mind, a circus is all of this set to accordions and applause: tumbling, dirty floors, spotlights, smoke and mirrors, tents, tension, colorful costumes, and gasping. Freaks of wonder, too, but I’d never call them monsters and raise them as my own. Not in real life, at least.

Well, Monster Rancher EVO is a videogame based around a group of circus performers. Don’t worry, I was just as confused you most likely are now. Granted, I went into this game totally innocent, completely untouched. Through all my years of gaming, I’ve managed to never play a Monster Rancher game. The franchise’s hook was always appealing–use CDs/DVDs to create random monsters for your farm, meaning a seemingly endless amount of user-created content–but the lack of a story or overall goal, other than raising an animal with love and care, kept me away. In fact, I didn’t pick this game out while perusing the local GameStop for my sweet, succulent Suikoden III; Tara found it and so it went with my buy pile. I didn’t give it a try right away.

It’s a rough first hour, full of bad dialogue and way too much information. You get to name the protagonist, but are given no solid indication that it is a he or she, and thanks to the anime-esque look to the majority of circus freaks it’s honestly kind of hard to tell. Naming him Pauly, I lucked out to discover he’s a dude. After that, you meet the gang at the circus and learn how sad the protag is over his latest monster’s lackluster performer. In walks a mysterious woman–I think her name is Marlene–and she teaches us how to make monsters. I put in my copy of Parklife by Blur and get some kind of weird pumpkin beast. Another guy talks about schedules and how to train to put on a great show, and then I’m given direct control of the protag. Tried to read the menus, but it was just an overwhelming amount of data and stats and things to come. Another character gives me a quest: she needs a cake, and even hands over the money to pay for it. Something like 500G, which seems excessive, but I don’t know much about this world; maybe that’s a good deal. I hurried over to the village in search of cake and made a beeline right back, but was told that I took too long and she no longer needed said cake. Eff you, and eff this stupid game. Power switch…OFF! 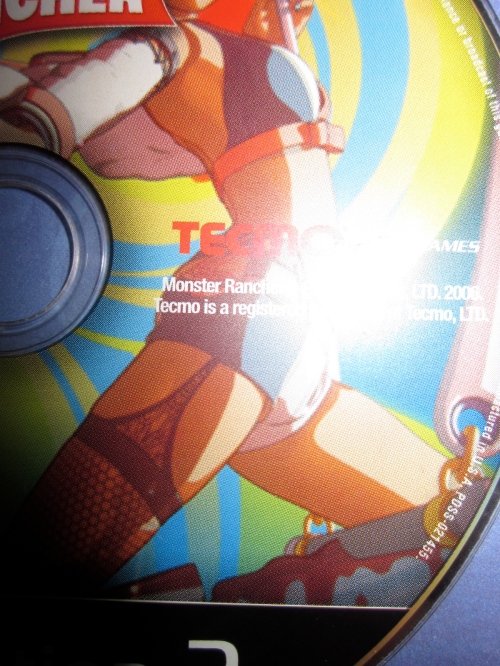 Also please note that she’s only wearing one fishnet stocking, with the other leg bare of such sexual dressing. Simply boggling. I don’t even know who this character is as I don’t think pointy-haired Pauly met her during the opening hour. I’d like to believe I’d remember something like that.

Right. Monster Rancher EVO. Don’t think I’ll be going back to this one, but if I could find one of the more traditional titles in the series I’m willing to go again. I mean, what else am I going to do with CDs like My Own Prison by Creed and Fairweather Johnson by Hootie and the Blowfish? Throw them out? That’s unheard of.