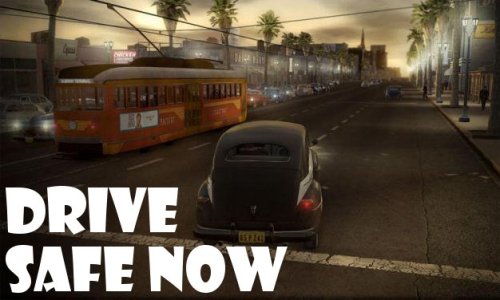 Causing a ruckus in open-world games like Grand Theft Auto III or Red Faction: Guerrilla was always  fun, but short-lived. You can only go so long destroying things and being a jerk before somebody takes notice. Heck, creeping over the speed limit in Mafia/Mafia II is enough to get the sirens singing, and then the law’s on your tail, switching your biggest concern from running down mailboxes and street-lamps to running from the cops. Usually, that scenario ends with a horrific crash and reload, wherein you lose some money and respawn at the local hospital or police station. Ah, the price one pays for spoliation.

Well, since L.A. Noire‘s Cole Phelps is the law, he can do whatever he wants, nice or not, as evident below:

The thorn in this Achievement’s side is that there’s no way to openly track how much damage in penalties one is amassing during a case. You only get these statistics at the end of a case, but I assumed that totaling a lot of cars and driving on the sidewalk for long stretches of time would be the best way to racking up fines. After an hour of this mayhem, I went ahead and finished up the case–“The Black Caesar” for the curious, which was a bad choice as it’s a pretty lengthy affair–and waited eagerly for the statistics screen to pop up. I was confident I had done enough damages, and I was right. Way too right. Ended up going overboard: $68,000 in car penalties alone, with another $8,000 or so for messing up the sidewalks so badly.

But man, crashing cars in L.A. Noire is fun…and funny, especially when you hear the things citizens say to Cole’s constant obsession with ramming them head on. “These people!” is probably my favorite of the bunch. Another nice aspect to being reckless in the 1940s is that the cars don’t blow up and Cole doesn’t go flying through the windshield with every crash. Guess that tech hasn’t been invented yet.

Now that Cole and I’ve gotten this out of our system, we can go back to being goody two shoes, in hopes of replaying all the cases and earning five-star ratings. Well, not all of them. I did great on some, but others I totally funked up, accusing the wrong dudes of crimes they didn’t commit. My bad. Also curious about some of the DLC cases; Tara was certainly excited to learn that there were more cases yet to play, but I just don’t know if they are worth the space credits or not. We’ll see how bored I get after finishing up Deus Ex: Human Revolution and waiting for The Elder Scrolls V: Skyrim to land…

One response to “Cole Phelps is L.A.’s public menace #1”