One month to go until The Elder Scrolls V: Skyrim

Today is 10/11/11, and The Elder Scrolls V: Skyrim comes out on 11/11/11. That’s a month away (31 days exact!), and that is absolutely crazy-talk. How did it pop up so fast? Weren’t we all just sitting mesmerized by the debut trailer and the hint of true epicness, whispering excitedly about a new engine and dragons? I also just realized that our day of reckoning is a Friday, meaning there goes an entire weekend for certain. Fine by me.

And yet with the game so close to being openly devoured by the public, it’s strange that there’s still a lot we don’t know about it. Over the last few months, there’s been very few gameplay trailers, with maybe just one big guided play session by Todd “For the Nord” Howard, and a preview article here and there. That’s it. Only as recent as this week have more tidbits slipped, thanks to leaks about the game’s map and manual.

Story elements are minimal, and we’ve learned some of the menu workings, but I’m more curious as to the open-ended aspect; can you buy homes again and spend days stocking them with cool loot or a thousand and five watermelons? Can you join all the different guilds without one getting mad at you for joining another? How does crafting work? How will companions work, and can I befriend animals? And so on and so on. Granted, we’ll all know too much soon enough. I am pretty stoked to see what Bethesda has done.

By 11/11/11, I hope to be pretty done with all the major games I currently have in my possession–Deus Ex: Human Revolution, Mafia II, and Fallout: New Vegas–as well as those select few titles I’ve yet to purchase. If not, they’ll all just eaten by a dragon. That’s the pox in the realm of Skyrim.

I poor, you poor, we all poor when picking up rupoor 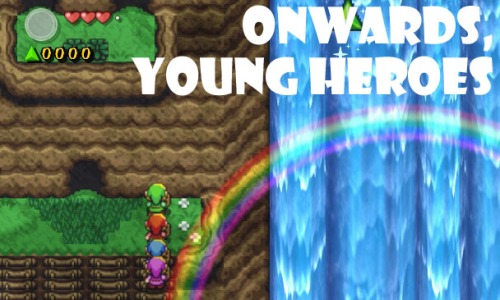 All my life, I’ve been led to believe that rupees hid in bushes, and that slashing at shrubbery was beneficial to both my bank account and ego. We can blame The Legend of Zelda for this, as rupees are the consistent currency throughout the franchise. You want a new shield? Better have some rupees. Interested in a bigger bag for your bomb collection? Pay up. Want someone to warm your bed at night while Zelda is all off getting kidnapped? Um…well, uh…

So there I was, playing The Legend of Zelda: Four Swords Adventures for free on my Nintendo 3DS, clearing out some bushes and tall grass in hopes of earning some kaching-kaching when a black-tinted rupee popped out and I picked it up on total basic instinct. Suddenly, four to five of my very own rupees jumped off Link’s body, screaming in pain, and these were red rupees, the ones worth a decent amount. Maybe 20 each, I think, and so we’re looking at losing 100 rupees upon contact. Now, as enemies began swarming, I was scrambling to recollect money I had already picked up before it disappeared. Everyone, meet the rupoor.

Evidently, rupoor showed up in The Legend of Zelda: Phantom Hourglass, a game which I played all the way up to the final dungeon and even took the time to unlock the fishing minigame, but I do not ever recall picking any of those black beasts up. If I did, I surely would’ve cried out in dismay. But in The Legend of Zelda: Four Swords Adventures, your rupee count is pretty important. Well, mostly if you’re playing co-op/against other players. Me? I’m doing the adventure solo, with a second controllable Link, but whether the first Link earns 578 rupees or the second Link earns 47 rupees, it ultimately doesn’t matter. We are one in the same, making the count-off at the end of each level rather silly. If was playing competitively against other Linkers, picking up a rupoor would be devastating.

What I find so fascinating is that, despite now knowing what rupoor does to my moneybag, four out of five times, I still end up picking it up. It’s just a reflex. Slash a bush, grab the item. Usually it’s something good: a health fairy, a green or blue rupee, a power-up. Sometimes I like to charge up the sword and spin in front of a bunch of bushes, collecting items like woah. It’s only now and then something pure evil pops out, but everything is already in motion.

At this point, I’ve completed the first three main levels (and a bit of the lengthy tutorial hub), and now I’m off to Death Mountaintop (?) to fight Vaati. I bet he just loves rupoor. After that, if rumor holds water, there’ll be some other levels to play based on fantastic themes such as 1993’s Link’s Awakening, 1992’s A Link to the Past and the 1987 original Legend of Zelda from the NES. That’s pretty exciting. Hopefully by then I’ll have learned to avoid rupoor, but somehow I doubt that. Feel free to ride my coattails in hopes of picking up some free cash.