Can’t say if I love Katamari Damacy or not, but its soundtracks absolutely rock 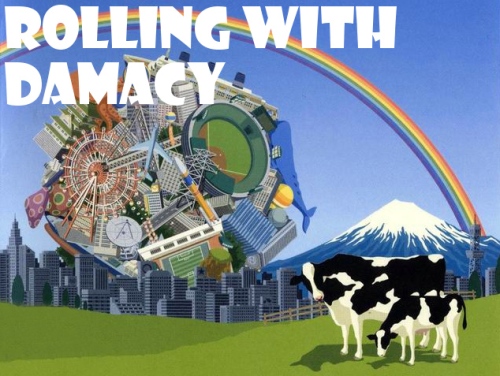 I’ve never played Katamari Damacy or its sequel We Love Katamari, but both games sound great. And by that, I don’t mean their plots are unique and stellar, their characters true works of art, going deeper than just rolling bags as flesh and bones. No, I mean these games sound great.

I use Grooveshark for streaming music while I edit text all day long, as it’s a better choice than burning CDs onto my work laptop or downloading a bunch of crap from the Interwebz. Much easier to just stream a huge playlist and never look back. The other day, tired of my listening staples, I decided to see if Grooveshark had any videogame-related tunes, and was pleasantly surprised to see that, yeah, they got a ton ready for groovin’ to. I played some Suikoden II, some Metal Gear Solid, and a few tracks from Chrono Cross (I touched upon how great its soundtrack is here). Then, for no reason other than pure curiosity, I looked up Katamari Damacy.

The Katamari Damacy series is the kind that I, unfortunately, judged before playing. Not that I even ever got to play it. I judged before I even played it and continued to judge it even after never playing it for several years. Shame on me, right? Maybe. I wrote it off as weird, kooky, too left of center. Gameplay involves rolling a ball called a “katamari” covered in an adhesive substance to collect objects until it is big enough to become a star in the sky. You’d think that with my love for Marble Madness, any game involving ball-rolling would hook its tethers in me deep. You’d think.

But yeah, Katamari Damacy tunes on Grooveshark. I added a bunch to a playlist, no specific order, and continued editing. However, I had to quickly stop editing as several of the tracks were of the ilk that demanded I do more than just listen to them. These were weird, but catchy weird. Kind of like the first time I delved into Passion Pit. A strange mix of electronica, jazz, pop, and even country. Yuu Miyake, of Tekken and Ridge Racer fame, wanted music surely as unique as the game, and I think he succeeded and then some. Each song goes for gold, trying to be more quirky and eclectic than the last, and they never stray into unlistenable territory.

I won’t bother listing tracks and talking about them specifically as there seems to be unclearness on what each track is actually called. I’ve found several varied names for the same bouncy pop number. Might as well just make up my own titles. In fact, my favorite song from Katamari Damacy‘s soundtrack is “Paul, the Wonder Hobbit”; what’s yours? That said, I might just have to track down a copy of either the first game or its sequel. Yeah, I still don’t know how much I’d love playing the game, but rolling a ball around to many of these tunes seems like a natural thing to do now that I’ve heard what’s on display. The problem is that with each trip to GameStop, there are less and less used PlayStation 2 titles on shelves to buy, and I’m not one to buy online, especially with all my latest mailing woes. Until then, I’ll just keep streaming the songs.