For the love of spritework 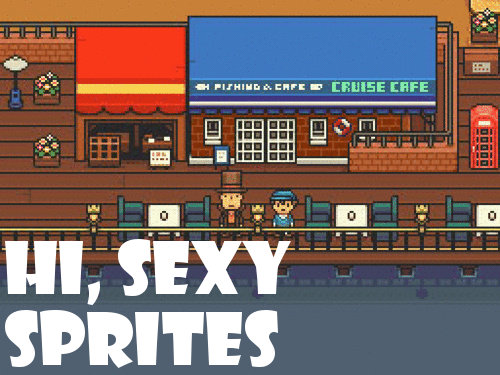 I’ve been thinking about sprites lately–no, not those kind–and why I absolutely love them, mainly to the point where a new game in 2011 with classic spritework is much more appealing to me than, say, just another modern title with all the latest tech, such as fancy lighting, particle effects, draw distance, and so on. Yup, even more than Elder Scrolls V: Skyrim. It’s hard to say if it’s all based on nostalgia or if it’s the artist in me appreciating that these moving images and interactive items on-screen were hand-crafted to be as is, to be simple yet recognizable, to still be able to stir emotions.

For nostalgia’s sake, I definitely grew up on sprite-based games. Earthbound, Super Metroid, The Legend of Zelda: A Link to the Past, Secret of Evermore, Mega Man X3, NHL ’94, Breath of Fire II, Secret of Mana–really, the list could go on. Blame this on the fact that the SNES was my first console ever, and that I ate up a lot of games on it. It’s where I became a gamer, grew my skills; I knew only sprites, and I had a hard time letting go. I think a lot of us did.

One of the first games I ever played on my PlayStation 1 was Beyond the Beyond, a strangely named RPG that I had rented for a few days. It tells the story of Finn, a young, unexperienced knight caught up in an ancient war between the Beings of Light and the Warlocks of the Underworld. Fairly traditional, and not just in story–the game, despite being released on an advanced console, looked like something one would play on their SNES. I was excited about this. I wasn’t ready for the future, for 3D gaming, for stuff like Battle Arena Toshinden and movable cameras. It wasn’t a great game, but it looked like what I had already learned to love, and that was enough for me to give it a try. I also fell hard for Suikoden and Suikoden II on the PlayStation, both of which feature gorgeous spritework paired with fantastic tunes.

When I moved on to the PlayStation 2, there were significantly less sprite-based games for that system. Maybe because that console had finally gotten a strong grasp on 3D gaming. A few still got my attention. Odin Sphere was repetitive as hecktown, but dang is it a beauty to behold. Marvel VS. Capcom 2 got a lot of play at friends’ houses. Can’t really think of others, unfortunately.

I’ve recently picked Chrono Trigger back up on the Nintendo DS and am enjoying traveling through time again, even if I’m rubbish at it. This is a game that’s eternal. It looks fabulous, just as it had when it released in August 1995, just as it will in twenty more years, and another thirty after that. These sprites are colorful and charismatic, eye-catching, easy to get. Only can sprites make a giant tick-boss look freaking amazing.

And now, in the current era of gaming systems–Xbox 360, PlayStation 3, Nintendo DS/Nintendo 3DS–I’m still always on the lookout for good ol’ sprite-based games. And they are still coming out, especially on the handhelds sideline. Really looking forward to Professor Layton’s London Life, which is a bonus add-on for Professor Layton and the Last Specter, coming out this October. It’ll be unlocked from the start, promises over 100 hours of gameplay, and basically screams, “Hey, you like Earthbound? Here’s a new Earthbound!” Mmm mmm, looks delicious.

I dunno. Maybe it is just the artist in me appreciating art over connect polygons. Maybe it’s seeing something that can last a lifetime and beyond. Maybe I just miss being a kid, holed up in my room, a SNES my closest and most constant friend. Do you love sprites or new games still rocking sprites? If so, why? Speak up, Grinding Down readers. Maybe we can get to the bottom of this.