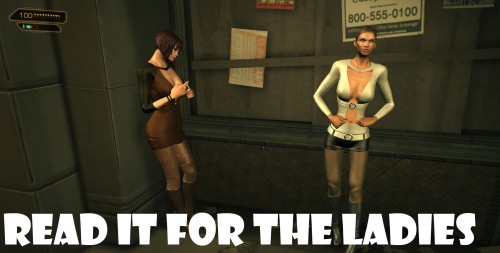 A little later on this than I hoped to be, but my coverage of Deus Ex: Human Revolution‘s first hour is now yours for the reading over at The First Hour. Either click the previous sentence or the image above to get there. Go ahead. I’d rather you read my article than the toss-able two paragraphs below.

I struggled–and am still struggling–with the game’s difficulty, even on that middle difficulty choice, which I guess some folks would call “normal.” A lot has to do with the in-game radar and how troublesome it is to creep the stealthy route. I have to imagine that going into a room and popping everyone in the head with a pistol shot before an alarm can be sounded would make things a lot easier…but that’s not how I like to play. Hopefully I get better as the game goes on and Jensen gets crazily customized, but I’m not holding my breath. Currently stuck on the very first boss battle, which I’ll save all ranting about for another post.