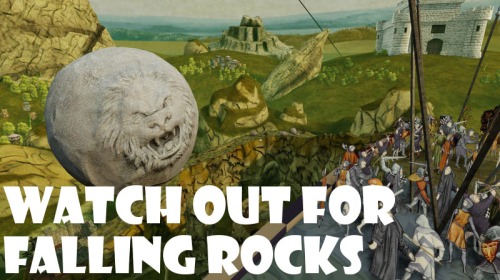 Little did you know, dear Grinding Down readers, but I used to collect rocks as a young lad. Mostly from my own driveway. Laugh all you want, but I had a bucket kept deep in the garage of the most special, most weirdly shaped, most coolest of cool solid minerals. No collection was greater than mine, and I was constantly adding to it, picking up “rarer” items like feldspar, milky quartz, and tiger’s eye from road-side travel shops when out vacationing with the family. Can’t recall what ultimately happened to it, but I suspect the rocks were dumped back into the driveway, from whence they came, like the One Ring, and are now no longer part of my collection, but that of the driveway’s, at the house I grew up in, but no longer see. It’s all kinds of sad.

Anyways, I’m thinking about rocks and my once beloved rock collection because I just watched a Quick Look of Rock of Ages, a game I saw mentioned from time to time online and completely assumed it had something to do with the Rock Band franchise. Um, nope. Evidently, it’s a…um…a tower defense title where the player rolls a boulder across a map and tries to knock down an opposing team’s castle’s doors. The majority of the action takes place from the boulder’s perspective, and you roll this rock through such ages as Ancient Greek, Medieval, Renaissance, Rococo, and Romanticism. Such a serious game requires such serious undertones, with a Monty Python-like humor, quirky music, and fart noises when you lose a match. Toot!

Yeah, it’s weird, but it actually makes more sense when you realize this creation is coming from the makers of Monkey Ball and Zeno Clash. I’m not a huge fan of the tower defense genre, as it always feels like a lot of waiting and planning, little action and doing. However, putting you in the role of the boulder tumbling down the hill is genius, and worrying about things like momentum while watching out for angry cows or sneaky catapults helps to keep things tense despite all the goofiness. If anything, I’d definitely give the demo a shot–if there is one–as this could be a fun time for Tara and I.

Maybe this is the start of my new (videogame only) rock collection?

For a nameless story, Anonymous Notes Chapter 1 – From the Abyss is quite a mouthful

I think I’m losing my mind. Also, not sure if the above screenshot is correct for the game I’m going to be talking about, but whatever–mind lost, deal with it. The house Tara and I just moved into over the weekend is still without power, with a guesstimate of maybe coming back on some time over the next five days; the basement is no longer flooded and it seems like those deadly branches have stopped falling from the sky, but we’ve yet to get back there and truly start living. I’m without all my comforts, my staples, my coffee pot–my console gaming systems. Yeah, no Deus Ex: Human Revolution yet. And trust me, I’m grateful for having a place to stay at Tara’s parents’ house, but time is moving forward, and all I want to do is get back to the house. Snargle-dargle-blargle.

Last night, while waiting to go out for Tara’s birthday dinner, I hopped online to the 3DS eShop to see if there was any new info about the forthcoming Ambassador NES games. There wasn’t. However, I did notice an irksome $3.67 in my account, which is not enough to get a big name game, but definitely enough for an indie thing or a calculator or one of those grouped under the $1.99 category. Remember, these downloads still get taxed after you select to purchase ’em. And something about Anonymous Notes Chapter 1 – From the Abyss caught my eyes, most certainly not its title. I’m guessing its look, which evokes that charming, 16-bit era of dungeon crawlers of yesteryear like Children of Mana and The Legend of Zelda: A Link to the Past. You kill monsters, get better equipment, and protect your hometown–that kind of experience.

So far, I’ve hacked and slashed some a whole lot of monsters, gathered some items into my inventory, got killed, and lost all of my items. Wee! It’s hard to tell if this is its own game, or just like a snippet plucked from the full DS retail release, just called From the Abyss. Disappointingly, I haven’t found a single anonymous note. The plot involves a guy conveniently named Raid meeting up with a girl named…Helen and then fighting down screen after screen of monsters and trying to destroy the monster boss to keep the lands safe and sound. Rinse and repeat. You can absorb abilities from monsters too, maybe just like in the wonderful Brave Fencer Musashi, but I haven’t really gotten the hang of it yet. As this is merely a single chapter in a longer story, I’m not expecting much, but then again, the game cost just about as much as my morning cup of hazelnut coffee (cream and sugar), and satisfied me for long enough. We’ll see if I keep grinding. Probably not considering tomorrow I’m getting 10 free NES games for my Nintendo 3DS. That’s all well and good, but I really just want to go home.